A Collection Of Sensational New Books And Comics Expand The World Of The Jim Henson Company’s Critically-Acclaimed Series, The Dark Crystal: Age Of Resistance, Available Now For The Holiday Season 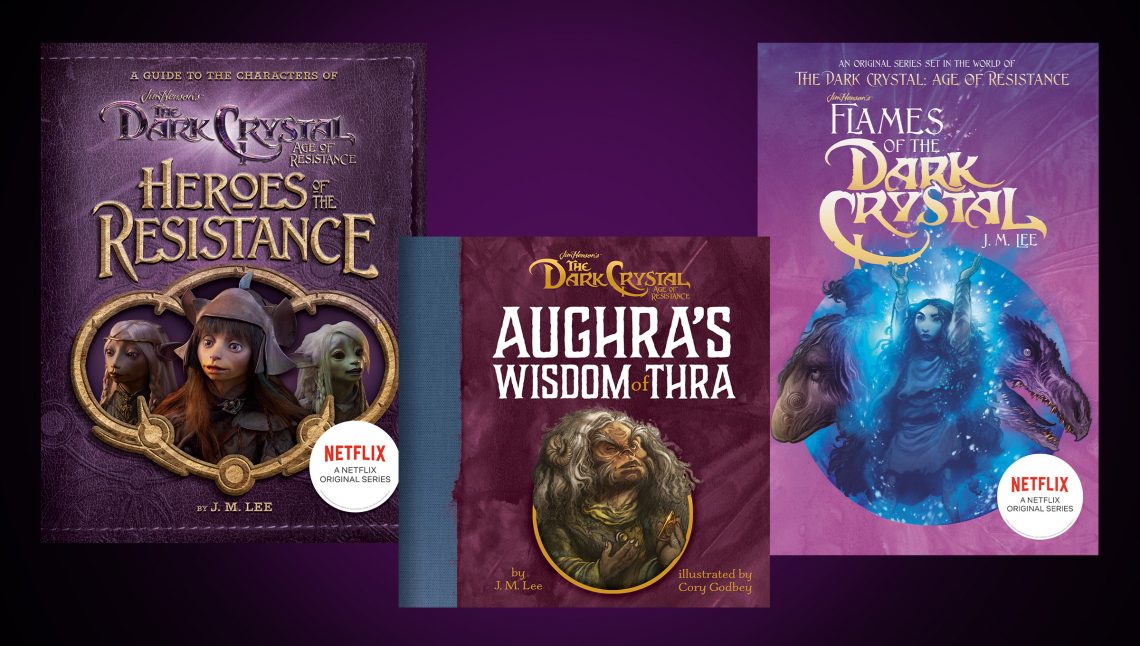 Hollywood, CA (November 20th, 2019) – Following the broad critical acclaim for The Jim Henson Company’s ten-episode epic fantasy adventure The Dark Crystal: Age of Resistance, which debuted this fall on Netflix, fans can become further immersed in the lore, legends, heroes and villains of the expansive world of Thra with a diverse range of newly released books and comics available now, in time for the gift-giving season!

Several new titles from Penguin Random House and Insight Editions are available at book retailers across the U.S., offering something for everyone—from new fans looking to learn more about their favorite characters from the series, to longtime fans wanting to delve further into the rich canon of this pop culture phenomenon, to anyone eager to discover the behind-the-scenes magic that brought the many creatures of Thra to life.

From Penguin Random House are three books by J.M. Lee, a staff writer on The Dark Crystal, Age of Resistance. Lee, who holds a degree in linguistics, also created the Podling language featured in the Netflix show. He is the author of a four-book prequel series that ties directly into the plot and setting for the Netflix series, as well as several other Dark Crystal tie-ins. The novels came about after Lee won a writing contest co-hosted by Penguin and The Jim Henson Company—The Dark Crystal Author Quest. New titles from Lee this season include:

• Heroes of the Resistance: A Guide to the Characters of The Dark Crystal: Age of Resistance: This visual character guide, featuring stunning full-color photos from the show, will have readers feeling as knowledgeable about the world of Thra and its inhabitants as the wise and all-knowing Aughra. Hardcover; MSRP $9.99; Ages 12+

• Aughra’s Wisdom of Thra: A 40-page companion gift book, with lush illustrations by artist Cory Godbey, that transports readers into the legends and lore of The Dark Crystal’s expansive mythology. Aughra is a feisty three-and-a-half-foot creature with ram horns, a detachable eye, and secrets to an entire fantasy universe, who guides readers with wisdom beyond this realm and advice only she can give. Hardcover; MSRP $12.99; Ages 12+

• The Dark Crystal: Age of Resistance: Inside the Epic Return to Thra: . Written by Daniel Wallace, with a foreword by executive producer Lisa Henson, this book reveals the incredible creative process behind the new series—how Jim Henson’s Creature Shop™, legendary character and costume designer Brian Froud, and director Louis Leterrier brought Thra and its characters to life alongside the many artists and puppeteers who are continuing the legacy of the original film. Filled with exclusive cast and crew interviews, concept art, set photography, puppet designs, and more, this is the definitive exploration of The Jim Henson Company’s epic return to Thra. MSRP $50.00; All Ages. Available at IndieBound, Barnes & Noble, and Amazon.

And for comic book fans, from Boom! Studios:

• Jim Henson’s The Dark Crystal: Age of Resistance, a 12-issue official prequel to the Netflix series. Return to another world, another time, Before the Age of Wonder. The Skeksis rein over Thra, but there are distant echoes of rebellion. Gelfling and unlikely heroes emerge to champion what is good and just, but their paths to legend started long ago. Epic tales of adventure, magic, and mystery send us back in time to the Age of Resistance to witness the untold histories that forged these protectors of Thra. Based on a story by The Dark Crystal: Age of Resistance series writers, Will Matthews & Jeffery Addiss, writer Nicole Andelfinger (Lumberjanes ) and Matias Basla ( Sparrowhawk ) tell the tale of the mighty Ordon and a young Fara on an impossible quest. An all-new arc from writer Adam Cesare and artist French Carlomagno spotlighting Hup, the heroic Podling, debuts on January 15, 2020. Print copies of the series are available at local comic book shops (comicshoplocator.com) or the BOOM! Studios webstore. Digital copies can be purchased from content providers, including comiXology, iBooks, Google Play, and Madefire. Individual issues MSRP $3.99; Ages 12+

ABOUT THE DARK CRYSTAL: AGE OF RESISTANCE
Called a “perfect revival” (The Washington Post), “a whimsical, fun and entertaining series” (The Hollywood Reporter), and “a prime example of how television can do fantasy right” (Variety), the Netflix Original series The Dark Crystal: Age of Resistance is a 10-episode puppet-filled prequel to the 1982 classic film. The groundbreaking production follows three Gelfling who discover the horrifying secret behind the Skeksis’ power and set out on an epic journey to reignite the fires of rebellion and save their world.  Directed by Louis Leterrier and executive produced by Leterrier, Lisa Henson, and Halle Stanford, the series stars an ensemble of fantastical, state-of-the-art characters and creatures created by Jim Henson’s Creature Shop™ and designed by Brian Froud, the original feature’s conceptual designer. Taron Egerton, Nathalie Emmanuel, and Anya Taylor-Joy lead a stellar voice cast including Awkwafina, Helena Bonham Carter, Natalie Dormer, Mark Hamill, Lena Heady, Jason Isaacs, Theo James, Toby Jones, Keegan-Michael Key, Gugu Mbatha-Raw, Simon Pegg, Mark Strong, Alicia Vikander, and Benedict Wong.

ABOUT THE JIM HENSON COMPANY
The Jim Henson Company has remained a leader in family entertainment for over 60 years and is recognized as an innovator in puppetry, animatronics, and digital animation. Henson’s most recent television credits include the critically-acclaimed Netflix Original series The Dark Crystal: Age of Resistance, as well as Word Party and the Emmy®-nominated PBS series Splash and Bubbles and Dinosaur Train. Productions include Fraggle Rock, The Storyteller, and the sci-fi series Farscape for TV, and the feature films The Star, Alexander and the Terrible, Horrible, No Good, Very Bad Day, The Dark Crystal, and Labyrinth. The Company is currently in production on the upcoming series Earth to Ned for Disney+ and Guillermo Del Toro’s Pinocchio for Netflix.
www.henson.com
www.facebook.com/hensoncompany
www.twitter.com/hensoncompany
www.instagram.com/hensoncompany