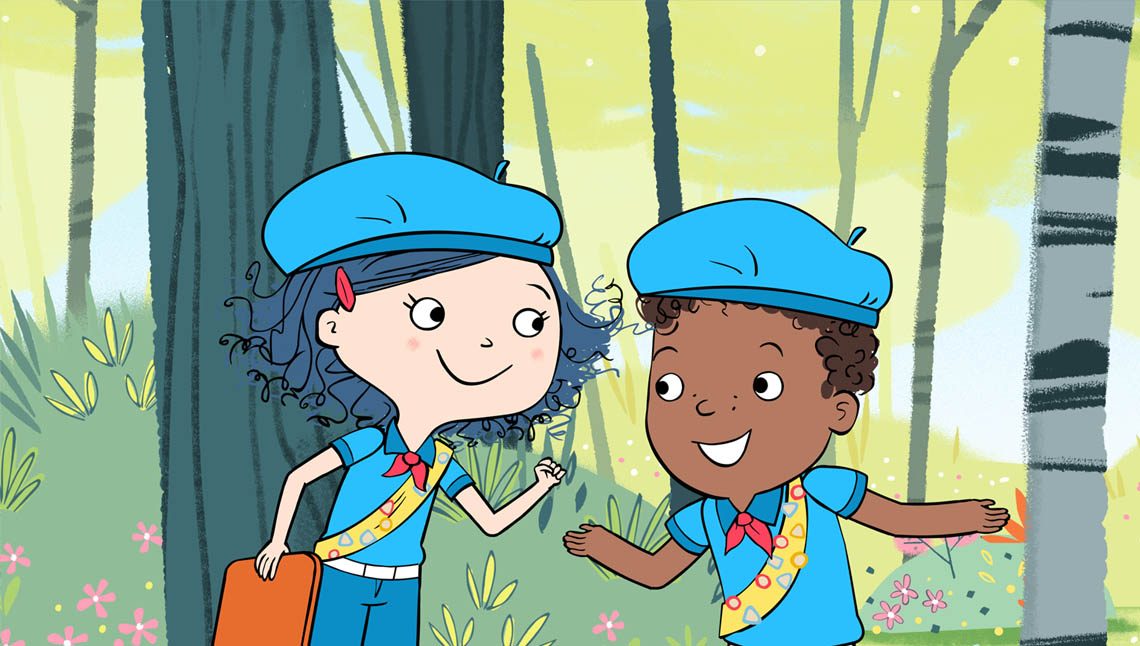 NAT GEO KIDS, NATIONAL GEOGRAPHIC PARTNERS’ multiplatform entertainment destination (App & TV) for 4 to 8-year-olds, acquired Dot. based on the popular book by tech expert and entrepreneur Randi Zuckerberg, who also serves as an executive producer for the show.

Produced by Industrial Brothers (creators of Top Wing, Yup Yups, Gummandos) in association with The Jim Henson Company (Splash and Bubbles, Word Party, Dinosaur Train) and the Canadian Broadcasting Corporation (CBC). The series is the first animated show for New York Times best-selling author Randi Zuckerberg, who is also founder & CEO of Zuckerberg Media. Dot. was born from Zuckerberg’s passion for motivating and inspiring young girls to develop an early love and appreciation for technology, math, and sciences.

The first season (52×11’) follows Dot, an 8-year-old tech savvy and inquisitive girl that uses technology to discover the world, embark on hilarious adventures, solve problems and have fun with her dog and friends.

Since its debut in 2016, the series has received the 2016 Kidscreen Award for Best New Series, a Parents’ Choice Award – Silver Medal, a Common Sense Media 5 Star rating, Roger’s Prize/BANFF Media Festival Excellence in Canadian Content Award, an ACTRA Outstanding Performance (Voice) for Lilly Bartlam (Dot) nomination, among others. Season 2 is currently in production.

“Nat Geo Kids content is meant to entertain kids as they learn, we are thrilled to share with our audiences, both kids and parents, the adventures of Dot, a little girl who encourages kids to connect with technology in a whole new different way. It encourages kids to be curious, creative and play outside to discover the world,” said Carmen Larios, SVP Content Strategy of National Geographic Partners in Latin America and continued: “Dot. is about empowering little girls and to give all kids the tools they need to learn about responsible use of technology. We’re very excited to bring this content to our Nat Geo Kids family in Latin America.”

“I am so thrilled that Dot. continues to impact and inspire so many young people,” said series creator and executive producer Randi Zuckerberg. “To me, it’s so important that families find a healthy and positive relationship with technology, and Dot. is doing just that by allowing children and their parents to join along for her tech-filled adventures! We can’t wait to see where Dot. takes us next.”

“Dot is inspiring kids and their families to embrace the modern digital age with enthusiasm and curiosity,” commented Ian Lambur, SVP of Global Distribution at The Jim Henson Company. “These themes are relevant around the world and we are happy that audiences in Latin America will now be able to share in the adventures of Dot and her friends.”

Nat Geo Kids is National Geographic Partners’ multiplatform entertainment destination (TV & App) for 4- to 7-year-olds. Nat Geo Kids offers parents a safe destination with the backing of National Geographic, one of the most prestigious brands worldwide with a legacy of over 128 years that gathers together the best scientists, explorers, photographers and filmmakers to create stories that help change the world. In this sense, Nat Geo Kids’ goal is to accompany children in their growth, knowing that a vocation and a passion for nature, adventure, creativity and science start in childhood. The brand offers more than 400 hours of entertainment with the best animated programming, including The Wild Adventures of Blinky Bill, Ready Jet Go!, Chuck’s Choice, Javi y el club del árbol, and Thomas Edison’s Secret Lab, among others. The offering is completed with blockbuster movies such as Madagascar, Megamind, and Dr. Seuss’ The Lorax that will soon be joined by original productions.

Industrial Brothers is a company that is focused on creating engaging content with memorable characters that tell unique stories for kids of all ages. Based in Toronto the company works closely with broadcast, production and distribution partners to develop high quality shows such as Top Wing (produced by 9 Story Media Group for Nickelodeon), the award winning preschool series Yup Yups (Disney Jr.) and the YouTube exclusive boys action series Gummandos.

The Jim Henson Company has remained an established leader in family entertainment for over 60 years and is recognized worldwide as an innovator in puppetry, animatronics and digital animation. Best known as creators of the world-famous Muppets, Henson has received over 50 Emmy® Awards and nine Grammy Awards. Recent credits include Julie’s Greenroom (Netflix), Dot. (Sprout/Hulu), Splash and Bubbles (PBS), Word Party (Netflix), Doozers (Hulu/Sprout), and the Emmy®-nominated Sid the Science Kid (PBS), Dinosaur Train (PBS), and Pajanimals (Sprout). Television productions include Fraggle Rock, The Storyteller and the sci-fi cult series Farscape. Features include Sony Pictures Animation’s The Star, Disney’s Alexander and the Terrible, Horrible, No Good, Very Bad Day, as well as The Dark Crystal, Labyrinth, MirrorMask, and Jim Henson’s Turkey Hollow. Upcoming productions include The Happytime Murders, starring Melissa McCarthy, and the Netflix original series The Dark Crystal: Age of Resistance. Feature films in development include the highly anticipated Fraggle Rock.

CBC/Radio-Canada is Canada’s national public broadcaster. Through our mandate to inform, enlighten and entertain, we play a central role in strengthening Canadian culture. As Canada’s trusted news source, we offer a uniquely Canadian perspective on news, current affairs and world affairs. Our distinctively homegrown entertainment programming draws audiences from across the country. Deeply rooted in communities, CBC/Radio-Canada offers diverse content in English, French and eight Indigenous languages. We are leading the transformation to meet the needs of Canadians in a digital world.

CBC Kids creates entertaining and inspiring media for children and the grownups who care for them. As Canada’s national broadcaster we continue our tradition of excellence and innovation in children’s content and reach our audience through CBC Television, our websites and social platforms.

Randi Zuckerberg is a New York Times bestselling author, the founder and CEO of Zuckerberg Media and host of “Dot Complicated” on SiriusXM. Randi also served as mentor on Oxygen’s show “Quit Your Day Job,” as well as executive producer of Dot. based on Randi’s recent children’s book, which premiered on CBC and Universal Kids Fall 2016. Randi appears regularly on NBC the TODAY show and CNBC, and has also been seen on CNN, Good Morning America, Fox Business, Bloomberg News, and ABC’s World News. She is a Tony Voter and was also a correspondent for the 2016 Tony Awards and the World Economic Forum in Davos. Randi was recently appointed as a Young Global Leader for the World Economic Forum and is part of the Tech Committee for the American Theatre Wing. In 2017, Randi launched the revolutionary tech-enabled dining experience ‘Sue’s Tech Kitchen.’