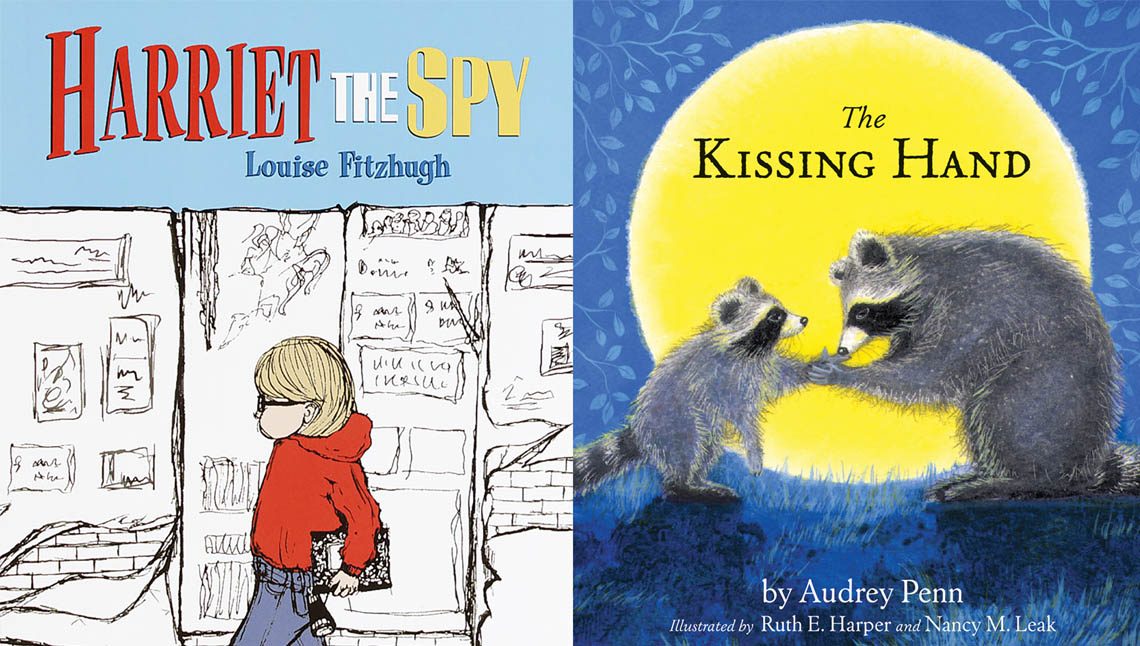 Published by Delacorte Press, an imprint of Random House Children’s Books, Fitzhugh’s Harriet the Spy is considered to be one of the finest books ever written for children. It is being developed as a new stylized 2D animated series that will follow the title character and aspiring writer Harriet the Spy, as she observes and writes about the bustling world of New York in the 1960s. BAFTA and Emmy Award-winning Karrot Entertainment (The Snowy Day, Sarah & Duck) is attached to animate the series.

Based on the beloved, award-winning, picture book and to be brought to life with adorable puppets from Jim Henson’s Creature Shop™, Penn’s The Kissing Hand, published by Tanglewood, will feature Chester the raccoon as he learns how to navigate going to school, making new friends, and dealing with the daily anxieties of a preschooler, with the love and support of Mama Raccoon and help from a comforting kiss she leaves on his hand.

“Both of these classic book properties share The Jim Henson Company’s commitment to entertain and inspire children, featuring dynamic characters and stories that celebrate creativity, empowerment, and joy,” said Stanford. “We have a deep respect for Harriet the Spy, and her many fans, and we’re ready to bring this real girl to audiences around the world. Similarly, The Kissing Hand, which is arguably the top book parents use to prepare their children for preschool and kindergarten, is deeply nurturing and perfectly suited for puppetry. Now more than ever, we believe children need the stories of Chester Raccoon and his Mama to encourage them to adventure in the world while still maintaining the loving connection of family and friends.”

Both properties have been shepherded by Rehab Entertainment’s John Hyde and Terissa Kelton, and 2 Friends Entertainment’s Wendy Moss-Klein and Nancy Steingard, alongside The Jim Henson Company’s Lisa Henson and Halle Stanford.

About Harriet the Spy

Harriet the Spy was ranked number 17 among all-time children’s novels in a survey published by School Library Journal in 2012, the same year Time Out New York Kids ranked it number 12 among “The 50 Best Books for Kids.” A 1996 movie based on the books, produced by Paramount Pictures, Nickelodeon Movies and Rastar, and starring Michelle Trachtenberg and Rosie O’Donnell, was named 1997 Kids’ Choice Award winner; and a live-action TV movie has also been produced by 2 Friends Entertainment for The Disney Channel.

About The Kissing Hand

Authored by Audrey Penn and illustrated by Ruth E. Harper and Nancy M. Leak, the first book in the series, The Kissing Hand, was originally published in 1993 by the Child Welfare League of America and has been used “to reassure children upset by separation anxiety.” Based on a 2007 online poll, the National Education Association named the book one of its “Teachers’ Top 100 Books for Children” and was named one of the “Top 100 Picture Books” of all time in a 2012 poll by School Library Journal. It has been translated into at least five languages, sold over 5 million copies and spawned five sequels illustrated by Barbara Leonard Gibson.

The Jim Henson Company has remained an established leader in family entertainment for over 60 years and is recognized worldwide as an innovator in puppetry, animatronics and digital animation. Best known as creators of the world-famous Muppets, Henson has received over 50 Emmy® Awards and nine Grammy Awards. Recent credits include Julie’s Greenroom (Netflix), Dot. (Sprout/Hulu), Splash and Bubbles (PBS), Word Party (Netflix), Doozers (Hulu/Sprout), and the Emmy®-nominated Sid the Science Kid (PBS), Dinosaur Train (PBS), and Pajanimals (Sprout). Television productions include Fraggle Rock, The Storyteller and the sci-fi cult series Farscape. Features include Sony Pictures Animation’s The Star, Disney’s Alexander and the Terrible, Horrible, No Good, Very Bad Day, as well as The Dark Crystal, Labyrinth, MirrorMask, and Jim Henson’s Turkey Hollow. Upcoming productions include The Happytime Murders, starring Melissa McCarthy, and the Netflix original series The Dark Crystal: Age of Resistance. Feature films in development include the highly anticipated Fraggle Rock.