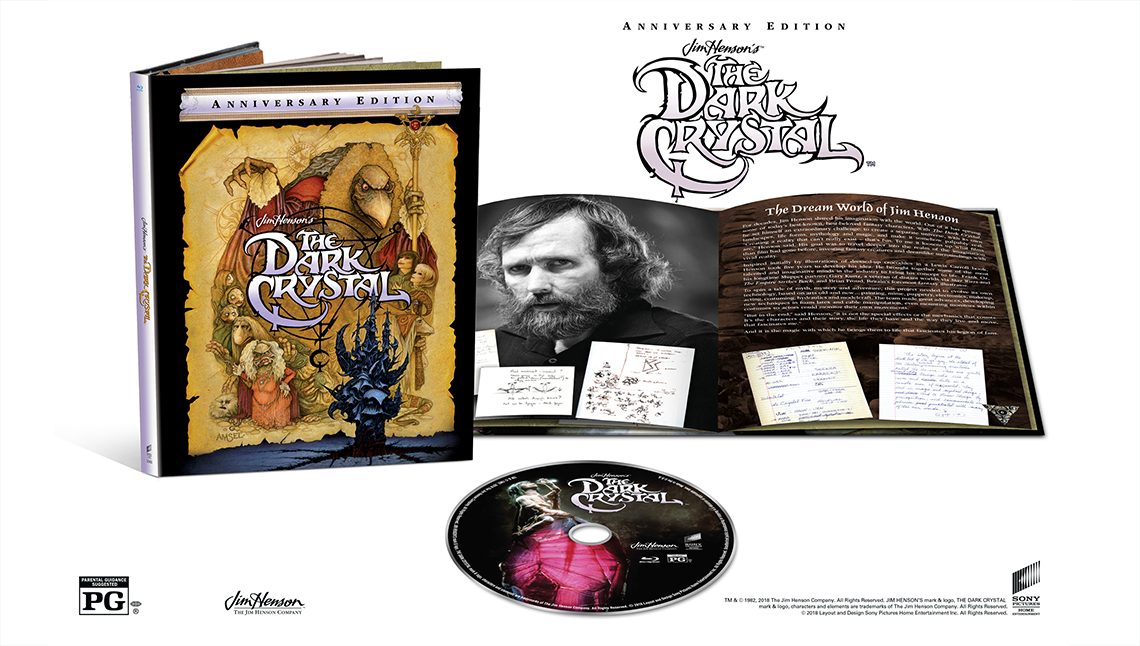 CULVER CITY, Calif. (December 20, 2017) – Revisit the masterful fantasy epic from the brilliant imagination of Jim Henson when THE DARK CRYSTAL debuts on 4K Ultra HD™ and returns to Blu-ray™ and digital on March 6 from Sony Pictures Home Entertainment. The visually spectacular tale of a young hero who must find a legendary relic in order restore harmony to the universe has been fully restored in 4K from the original camera negative. Additionally, the Blu-ray is housed in a lavish, limited edition 24-page Digibook, complete with rare archival photos and behind-the-scenes stories. Included among the hours of archival bonus material is the all-new featurette “The Myth, Magic and Henson Legacy,” where fans go behind the scenes of this iconic film with insight from Lisa Henson and Toby Froud.

THE DARK CRYSTAL on 4K Ultra HD includes Dolby Atmos audio and is presented in full 4K resolution with HDR. The 4K restoration also serves as the basis for the 1080p HD presentation on Blu-ray.

SNYOPSIS:
In another time, The Dark Crystal was the Balance and Truth in the Universe, but was destroyed dividing the world into two factions: the wicked Skeksis and the peaceful Mystics. Now as the convergence of the three suns approaches the Crystal must be healed or darkness will reign forever. It is up to Jen, the last of his race, to carry out the prophecy that a Gelfing will return the missing chard of crystal and destroy the Skeksis’ evil Empire. But will Jen be up to the challenge of battling the unknown? Directed by Jim Henson and Frank Oz with producer Gary Kurtz (Stars Wars, The Empire Strikes Back), The Dark Crystal is a fantasy masterpiece weaving a timeless myth of Good and Evil.

Blu-ray Bonus Features Include:
ALL-NEW: The Myth, Magic and Henson Legacy: Go behind the scenes of this iconic film with stories from Lisa Henson and Toby Froud.
Deleted Scenes
Commentary with Brian Froud
Picture-in-Picture Storyboard Track
Original Skeksis Language Scenes with Introduction by Screenwriter David Odell
The World of The Dark Crystal Documentary
Reflections of The Dark Crystal: “Light on the Path of Creation” & “Shard of Illusion”
Photo Galleries
Theatrical Teaser & Trailer
THE DARK CRYSTAL has a running time of approximately 93 minutes and is rated PG.

About The Jim Henson Company
The Jim Henson Company has remained an established leader in family entertainment for over 60 years and is recognized worldwide as an innovator in puppetry, animatronics and digital animation. Best known as creators of the world-famous Muppets, Henson has received over 50 Emmy Awards, two Academy Awards and nine Grammy Awards. The Company is currently in production on the feature film The Happytime Murders, starring Melissa McCarthy, and the upcoming Netflix original series The Dark Crystal: Age of Resistance. Recent credits include Julie’s Greenroom (Netflix), Dot. (Sprout/Hulu), Splash and Bubbles (PBS), Word Party (Netflix), Doozers (Hulu/ Sprout), and the Emmy®-nominated Sid the Science Kid (PBS), and Dinosaur Train (PBS). Television productions include Fraggle Rock, The Storyteller and the sci-fi cult series Farscape. Features include The Dark Crystal, Labyrinth, and MirrorMask. Projects in development include the highly anticipated film Fraggle Rock.

The Jim Henson Company is headquartered in Los Angeles on the historic Charlie Chaplin lot with additional locations in New York and London. The Company is home to Jim Henson’s Creature Shop™, a pre-eminent character-building, and visual effects group, as well as Henson Recording Studios, one of the music industry’s top recording facilities.