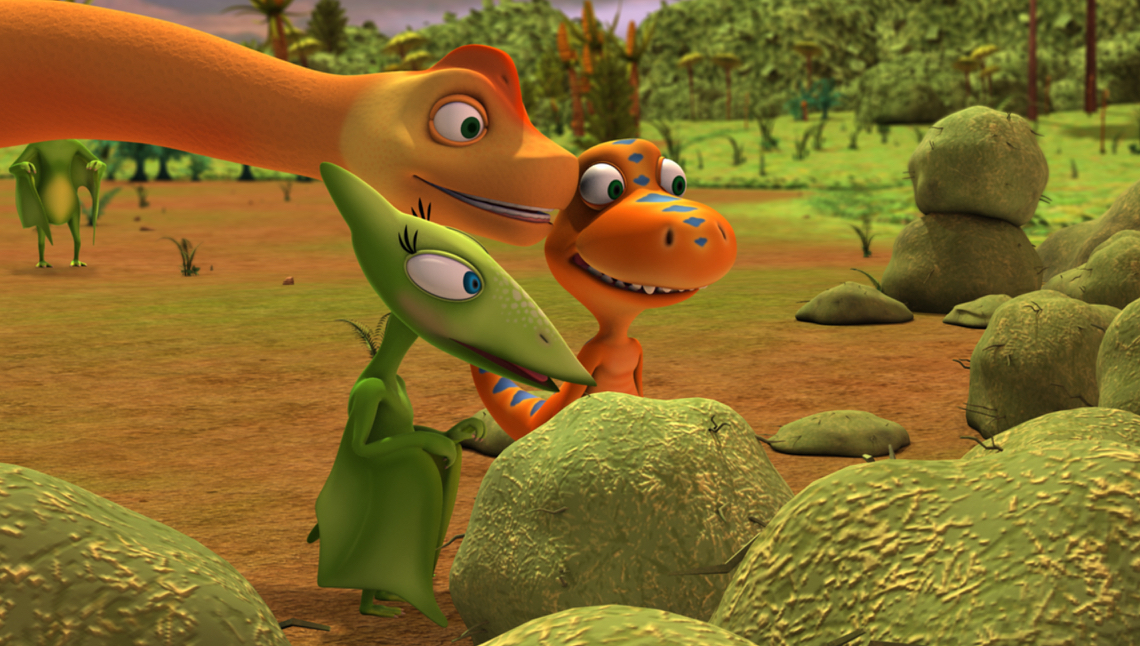 ARLINGTON, VA (June 19, 2017) – PBS Distribution announced today it is releasing the DVD “IT’S POTTY TIME!” which features four episodes from three PBS KIDS series. In this collection, young viewers will join some of their favorite PBS KIDS friends as they tackle potty training. “IT’S POTTY TIME!” has an SRP of $6.99 and will be available on DVD starting September 12, 2017. The DVD has a run time of approximately 60 minutes.

Come along as Prince Wednesday learns how important it is to stop and go potty right away in a story from DANIEL TIGER’S NEIGHBORHOOD, while in an episode of PEG + CAT, Peg and Cat show Big Mouth the six steps of going potty. A story from DINOSAUR TRAIN in which Buddy and Tiny discover that “all creatures poop,” even really big dinosaurs, is also included.

Stories featured on the new title include:

“Prince Wednesday Goes to the Potty”
Prince Wednesday is in the block corner at school, building the “tallest tower in the world!” Even though he needs to go to the bathroom, he doesn’t want to stop what he is doing. He learns how important it is to stop and go right away.

“The Potty Problem”
Peg and Cat must teach Big Mouth the 6 steps for making on the potty, or his visit to Viv’s house will be ruined – as will Viv’s carpet!

The Company was founded by Fred Rogers in 1971 as the non-profit producer of Mister Rogers’ Neighborhood for PBS. In the years that followed, it not only created hundreds of episodes of this much-loved program, but also extended Fred’s values and approach to other efforts in promoting children’s social, emotional, and behavioral health and supporting parents, caregivers, teachers, and other professionals in their work with children. The Fred Rogers Company continues to build on Fred’s legacy in innovative ways through a wide variety of media, and engaging new generations of children and families with his timeless wisdom. The Company’s highly-rated, award-winning children’s series include Daniel Tiger’s Neighborhood, Peg + Cat, and Odd Squad. For more information, visit www.fredrogers.org or follow us on Facebook and Twitter.

The Corporation for Public Broadcasting (CPB), a private, nonprofit corporation created by Congress in 1967, is the steward of the federal government’s investment in public broadcasting. It helps support the operations of nearly 1,500 locally owned and operated public television and radio stations nationwide. CPB is also the largest single source of funding for research, technology, and program development for public radio, television and related online services. For more information, visit www.cpb.org, follow us on Twitter @CPBmedia, Facebook, and LinkedIn, and subscribe for email updates.

PEG + CAT
About The Ready To Learn Initiative

The Ready To Learn Initiative is a cooperative agreement funded and managed by the U.S. Department of Education’s Office of Innovation and Improvement. It supports the development of innovative educational television and digital media targeted at preschool and early elementary school children and their families. Its general goal is to promote early learning and school readiness, with a particular interest in reaching low-income children. In addition to creating television and other media products, the program supports activities intended to promote national distribution of the programming, effective educational uses of the programming, community-based outreach and research on educational effectiveness. Proceeds from the inclusion of “Peg + Cat” within this DVD will help support projects that further the goals and objectives of the Ready To Learn Initiative.