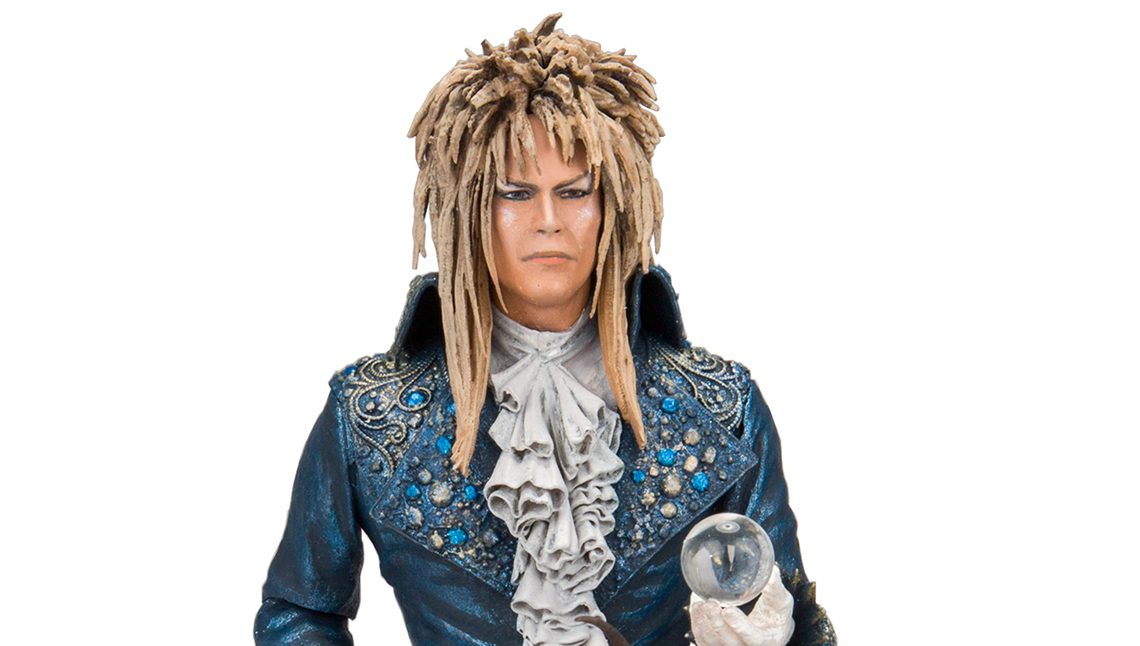 TEMPE, AZ and HOLLYWOOD, CA – May 18, 2017 –The Jim Henson Company has partnered with McFarlane Toys, which will harken back to its roots of “Movie Maniacs,” to create figures of classic characters from two of Henson’s most well-known features Labyrinth and The Dark Crystal.

Directed by visionary Jim Henson and executive produced by George Lucas, Labyrinth is a fan favorite and wonder of puppetry. Stuck babysitting her brother, teenager Sarah, resentfully wishes The Goblin King (memorably portrayed by David Bowie) can take him away. When her wish comes true, Sarah must head into the Labyrinth herself to save him. Since its 1986 release, the film has garnered a cult popularity and is still reveled in today’s era as a timeless classic.

Celebrating its 35th anniversary this year, The Dark Crystal, directed by Jim Henson and Frank Oz, brilliantly weaves a timeless myth of good and evil. In another time, The Dark Crystal, a source of balance and truth in the universe, was broken, dividing the world into two factions; the wicked Skeksis and the peaceful Mystics. Now, as the convergence of the three suns approaches, the crystal must be healed, or darkness will reign forever. The Dark Crystal’s fanbase has only risen since the film’s debut and the film has also developed a devoted following across the world.

McFarlane Toys has produced highly detailed figures and construction sets for various entertainment properties and this collaboration with The Jim Henson Company will give fans of these iconic films new and unique action figures that are “true to life” replicas of their on-screen personas.

The upcoming toys will include a 7-inch figure of Labyrinth’s Jareth the Goblin King, and for The Dark Crystal, fans can look forward to figures of Jen and Kira. Each figure will be highly detailed and come fully articulated to recreate iconic movie scenes. These figures will also debut in new window box collector packaging and will come with Labyrinth and The Dark Crystal branded detailed bases.

“The beautifully created figures from the talented team at McFarlane Toys will bring to life these iconic characters and allow our fans to show their passion and enthusiasm for these beloved fantasy productions,” said Nicole Goldman, Executive Vice President, Marketing/PR and Education Initiatives for The Jim Henson Company.

“Jim Henson was one of the most visually creative minds, and these incredible movies are just the tip of the iceberg,” said Todd McFarlane, Owner and CEO of McFarlane Toys. “We pride ourselves on our creativity and attention to detail, and to be able to make figures of these iconic characters is something pretty special.”

McFarlane Toys’ Labyrinth Jareth the Goblin King figure will be available at major retailers this November carrying an MSRP: $19.99. The Dark Crystal Jen and Kira figures are slated to release Spring 2018. For more information about The Jim Henson Company visit www.henson.com. For more information about everything McFarlane Toys, fans are encouraged to check out www.mcfarlane.com as well as the McFarlane social media channels for updates and news.