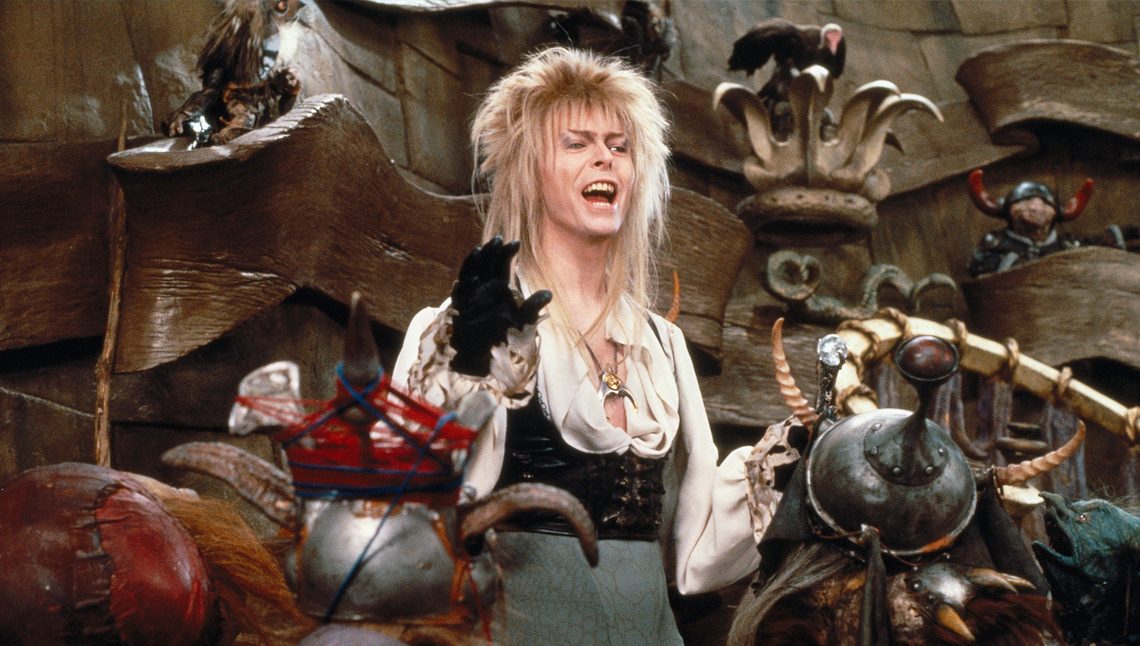 LOS ANGELES, CA (Aptril 26, 2017) – Extending the 30th anniversary celebration of the beloved film, Labyrinth, Jim Henson’s mesmerizing and enduring fantasy classic, David Bowie and Trevor Jones’ iconic soundtrack will be remastered and reissued on vinyl on May 12 for the first time since its original 1986 release. Long out of print, the album, which was remastered at Capitol Studios, will be available on high quality 120gm black vinyl and include the faithfully replicated original jacket and artwork, including the original EMI America logo and the printed inner sleeve featuring photos of Bowie from the film. Pre-order Labyrinth here: https://UMe.lnk.to/LabyrinthLP

Praised by film critics and moviegoers alike for its astonishing imagery and distinct characters, Labyrinth has been celebrated for being wildly ahead of its time. Directed by Jim Henson and executive produced by George Lucas, the film, which stars David Bowie as Jareth, The Goblin King, is full of memorable creatures brought to life by Jim Henson’s Creature Shop™, working closely with acclaimed artist and conceptual designer Brian Froud.

In a 1986 interview with Movieline, Bowie recalled his first meeting with Henson to discuss the film: “Jim Henson set up a meeting with me while I was doing my 1983 tour in the States, and he outlined the basic concept for Labyrinth and showed me some of Brian Froud’s artwork. I’d always wanted to be involved in the music-writing aspect of a movie that would appeal to children of all ages, as well as everyone else, and I must say that Jim gave me a completely free hand with it. The script itself was terribly amusing without being vicious or spiteful or bloody, and it also had a lot more heart than many other special effects movies. So I was pretty well hooked from the beginning.”

Described by The Atlantic as “101 minutes of Bowie rock opera and Hensonian spectacle,” Labyrinth was the second major soundtrack that Bowie worked on, falling between his 16th and 17th studio albums, Tonight and Never Let Me Down. He wrote and recorded five original songs for the film, including “Underground,” “As The World Falls Down,” and “Magic Dance” with its famous oft-repeated opening: “You remind me of the babe/What babe? The babe with the power/What power? The power of voodoo/Who do? You do/Do what? Remind me of the babe.” All songs were performed by Bowie except “Chilly Down” which was sung by Charles Augins, Richard Bodkin, Kevin Clash, and Danny John-Jules, the actors who voiced the ‘Firey’ creatures in the film. In the aforementioned interview with Movieline around the film and soundtrack’s release, Bowie revealed an obstacle he encountered while recording. “With ‘Dance Magic’ – the song for Jareth and the baby, sung by them and the goblins in the castle throne room – I had problems,” Bowie explained. “The baby I used in the recording studios couldn’t, or wouldn’t, put more than two gurgles together, so I ended up doing the baby-gurgle chorus myself! It’s an up-tempo song, and visually exciting.”

The 12-track soundtrack is rounded out with Trevor Jones’ memorable score. The synth-based instrumentals, described by All Music Guide as “synthesizers blended cautiously into orchestral ensembles to provide a suitably ethereal tone,” represent pivotal moments from the film and include “Into the Labyrinth,” “Sarah,” “Hallucination,” “The Goblin Battle,” “Thirteen O’Clock,” and “Home at Last.” Jones and Henson previously worked together on the live action fantasy classic, The Dark Crystal.

Labyrinth celebrated its 30th anniversary last year and the film and soundtrack have only grown in popularity since its release on June 27, 1986. Last year, a newly restored 4K version of the movie was released back in theaters with a limited engagement theatrical run in the United States giving fans the opportunity to see it back on the big screen. On September 20th, Sony Pictures Home Entertainment released the film on Blu-ray, next-generation 4K Ultra HDTM, and as a multi-format 30th Anniversary Collector’s Edition complete with unique “mirrorbox” packaging that included a mini replica of the film’s climactic and iconic final scene. All versions include a host of all-new bonus content and a gorgeous 24-page Digibook filled with rare photos and a look behind the scenes.