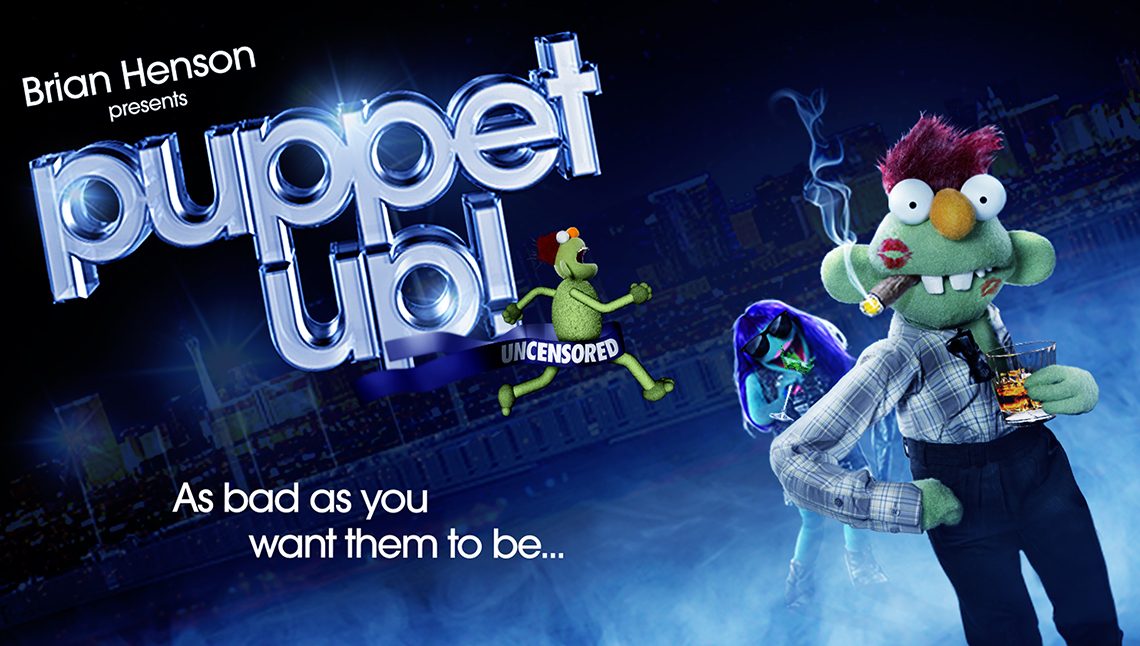 HOLLYWOOD, CA (February 17, 2017) – Brian Henson invites you to celebrate the 10-year anniversary of the Hollywood premiere of Puppet Up! – Uncensored, on Saturday, March 11th, 2017, at 6pm and 9pm. For the first time, the public is invited to attend this critically-acclaimed and internationally-renowned live stage show at The Jim Henson Company’s historic Hollywood studio lot, providing an unforgettable and hilarious evening in a truly unique and treasured location.

Created by award-winning director, producer, Brian Henson (Muppet Christmas Carol, Muppet Treasure Island), and actor, director, and improv expert Patrick Bristow (Ellen, Seinfeld, Curb Your Enthusiasm, Whose Line Is It Anyway?), Puppet Up! – Uncensored promises to deliver a completely unique experience, expertly combining dynamic and spontaneous off-the-cuff comedy and outrageous story lines with the unmatched talent and creativity of Henson puppeteers. Puppet Up! – Uncensored is never exactly the same show twice. Guests may choose to interact with the show through real time suggestions or just sit back and enjoy the ever-changing antics presented on stage.

Over the years, the revolving cast of world-class puppeteers and over 80 unruly puppets have been entertaining audiences, selling out shows, and thrilling critics from coast to coast and around the world. In 2005, the show toured several international comedy festivals and finally in 2007, it premiered in Hollywood where it has since built an enthusiastic following.

“For the first time ever, we are giving our loyal Hollywood fans the opportunity to spend an evening on our historic lot while enjoying hilarious uncensored mayhem.” said Brian Henson, show creator and Chairman of The Jim Henson Company.

General Admission tickets for the event can be purchased by visiting puppetup.tix.com or by calling 800.595.4849. Tickets are $60.00 and will be available for pick up at will call. A limited amount of VIP Parking on The Jim Henson Company lot is available for advance purchase only for $15.00. A full cash bar will be available an hour before the show, and the house opens for seating 20 minutes prior to show time. Puppet Up! – Uncensored is not recommended for ages 16 and under.

About Henson Alternative
Henson Alternative is The Jim Henson Company’s label for content created specifically and exclusively for adult audiences. In 1955, Jim Henson’s first television production Sam & Friends appeared on late-night television as a lead in to The Tonight Show, establishing a standard in the Company’s work for irreverent, creative comedy projects that spoke to adults. Appearances on The Jimmy Dean Show, The Ed Sullivan Show, and Saturday Night Live, as well as numerous short films for clients like IBM and AT&T, proved that Henson puppetry was not limited to children. Today, Henson Alternative continues to produce and develop projects for this audience. Credits include No, You Shut Up!, (Fusion), Neil’s Puppet Dreams (Nerdist), Tinseltown (Logo), Puppet Up! – Uncensored (a live puppet improvisational show named one of the top 10 “Best Stage Shows” by Entertainment Weekly), and the upcoming feature film Happytime Murders currently in development with STX Entertainment.
About WestBeth Entertainment
WestBeth Entertainment has consistently delivered critically acclaimed, financially successful, groundbreaking productions and performances for over 30 years. WestBeth’s ability to meld creative vision with financial and production savvy has created a unique company out of making artists’ and audience’s dreams come true.
From Billy Connolly to Eddie Izzard, and The Jim Henson Company to John Leguizamo, WBE has been the creative catalyst, partner and producer of some of the most innovative performances and productions on the continent in venues throughout North America including Madison Square Garden, The Hollywood Bowl, Toronto’s Massey Hall, Chicago’s Chicago Theatre and even New York’s Radio City Musical Hall.

With entertainment and audience enjoyment being a key element, our most recent productions include: Eddie Izzard’s 67 city Force Majeure American Tour; Billy Connolly’s High Horse tour of Canada, the off-Broadway run of comedian Trevor Noah’s Born a Crime; Eric Idle’s What About Dick at the Orpheum Theatre in Los Angeles; John Leguizamo’s Ghetto Klown on Broadway, the West End, and Colombia, South America; and the national tour, Off-Broadway, Australia tour and Edinburgh Fringe Festival runs of The Jim Henson Company’s Puppet Up, Uncensored!