Netflix Announced The Worldwide Debut Of Julie’s Greenroom, A New Preschool Series From The Jim Henson Company Celebrating The Performing Arts, Starring And Co-Created By The Legendary Julie Andrews 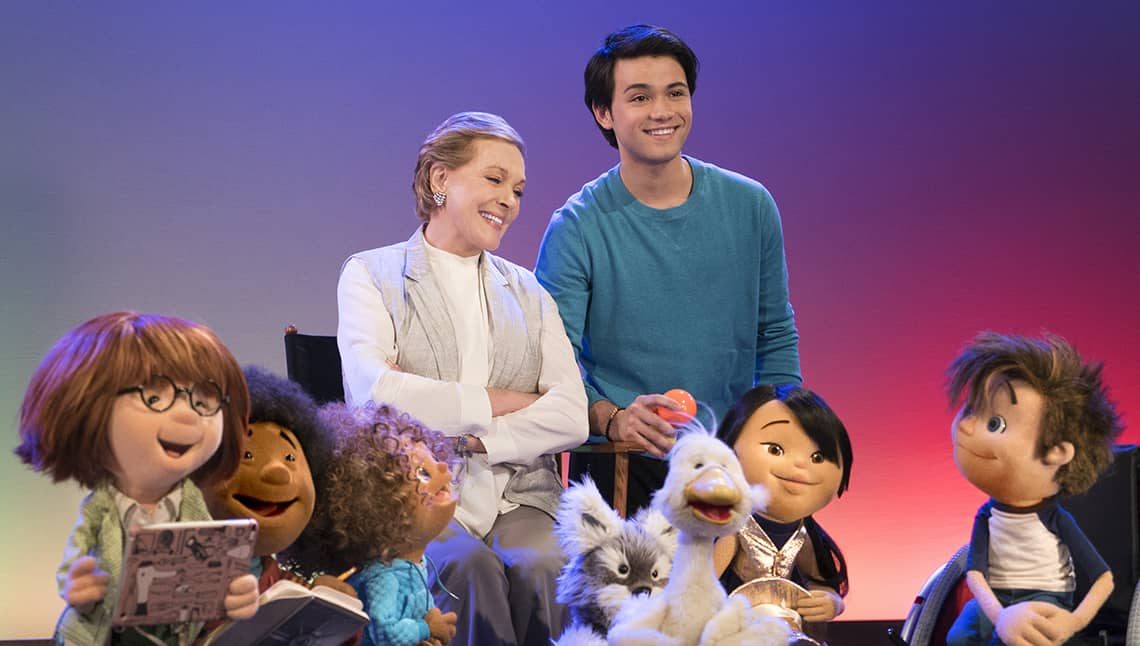 Andrews, who created the series with her daughter Emma Walton Hamilton and Judy Rothman Rofé, will executive produce and star as Ms. Julie – the director of the Wellspring Center for the Performing Arts in which she teaches performing arts workshops in the theatre and its “Greenroom.”

Ms. Julie and her devoted assistant Gus (Giullian Yao Gioiello) bring the performing arts to a new generation of kids known as the “Greenies,” played by original puppet characters built by the renowned Jim Henson’s Creature Shop. The Greenies are a diverse group of kids who are mesmerized by all that the arts and creativity has to offer. Over the course of the season, with Ms. Julie’s guidance and inspiration from the visiting guest artists, the kids create an entirely original new show, that is a mashup of all the performing arts including mime, music, dance, improv, circus arts, voice and more.

Ms. Andrews commented that “this project represents the fulfilment of a long held dream to educate children about the wonder of the arts. I am thrilled to be partnering with my daughter and long time coauthor, Emma, to bring this show to life along with our co-creator, Judy Rothman Rofé. We could not be more honored to be working with the extraordinary Jim Henson Company. We are equally delighted to be premiering as a Netflix original production.”

“It’s been such an incredible treat to work with Julie on this project,” said Andy Yeatman, Director of Global Kids Content at Netflix. “This show is all about awakening children’s interest in the performing arts while introducing a new era of puppets to the viewers.”

“The best of the best have joined together to bring Julie’s Greenroom to Netflix,” said Lisa Henson, CEO of The Jim Henson Company. “Our award-winning director, Tony-nominated puppeteers, Broadway composer, and accomplished guest artists, led by the incomparable Julie Andrews, together will inspire kids to explore, appreciate and celebrate all forms of performing arts.”

Julie’s Greenroom began shooting this May in Long Island, New York. The thirteen 30-minute episodes will premiere globally on Netflix in early 2017. Julie’s Greenroom is a Netflix Original produced by The Jim Henson Company and is executive produced by Julie Andrews, Emma Walton Hamilton and Steve Sauer, and Lisa Henson and Halle Stanford for The Jim Henson Company. Emmy Award® winning actor and writer Joey Mazzarino is co-producer and director, Tom Keniston is producer, and Emmy Award® winner Bill Sherman joins the series as composer.

Netflix is the world’s leading Internet television network with over 81 million members in over 190 countries enjoying more than 125 million hours of TV shows and movies per day, including original series, documentaries and feature films. Members can watch as much as they want, anytime, anywhere, on nearly any Internet-connected screen. Members can play, pause and resume watching, all without commercials or commitments.

With additional locations in New York and London, The Jim Henson Company is headquartered in Los Angeles on the historic Charlie Chaplin lot, complete with soundstage and postproduction facilities. The Company is home to Jim Henson’s Creature Shop™, a pre-eminent character- building and visual effects group with international film, television, theme park and advertising clients, as well as Henson Recording Studios, one of the music industry’s top recording facilities known for its world-class blend of state-of- the-art and vintage equipment. The Company’s Henson Alternative brand is currently touring Puppet-Up! – Uncensored, a live puppet improvisational show.