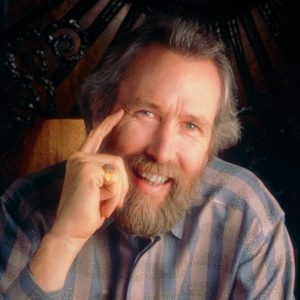 Jim Henson, an extraordinary artist and visionary, invented unique worlds and characters that remain just as vivid, original and fresh today as when they were created. A television pioneer, an innovator in puppetry, technology and visual arts, and a performer who literally brought to life some of the most memorable characters ever-including the world’s most famous frog, Kermit™ – Jim Henson’s impact on entertainment, education and culture continues to this day.

Born September 24, 1936 at King’s Daughters Hospital in Greenville, Mississippi, Jim was the second son of Paul and Betty Henson. Jim spent his early years in Leland, MS where his father worked with the U.S. Department of Agriculture. Throughout his youth, Jim had an interest in art and, later, television. He was particularly close to his maternal grandmother, an avid painter, quilter, and needleworker, and he visited her often. She was supportive of Jim’s artistic efforts and encouraged him to use his imagination and to take delight in the world around him.

When Jim was in the fifth grade, the Henson family moved to Maryland. There Jim, often with his older brother Paul, experimented with a variety of artistic techniques- experiments which eventually led Jim to the very latest visual media, television. In 1954, while still in high school, Jim began his television career performing puppets on a local Washington, DC Saturday morning program on WTOP-TV. The following year, as a freshman at the University of Maryland, he was given his own twice-daily, five-minute show, Sam and Friends, on the local NBC affiliate, WRC-TV. Jim along with his assistant, fellow University of Maryland student and future wife, Jane Nebel, introduced many Muppet mainstays-music, snarky humor and innovative technical tricks (such as eliminating the puppet stage and using the television itself as the proscenium). Perhaps most memorably, the show featured an early version of Kermit the Frog™.

The success of Sam and Friends led to guest appearances on such national network programs as The Steve Allen Show, The Jack Paar Show and Today. Jim also began making hundreds of humorous commercials for sponsors throughout the country. In 1961, as Muppets, Inc. grew, Jim and Jane brought on puppeteer and writer Jerry Juhl, who would become one of Jim’s major collaborators. The demands of national television appearances brought Jim and his family to New York in 1963. With weekly appearances on Today and an ever-growing list of commercial clients, Jim sought out the talents of master puppet builder, Don Sahlin and young puppeteer, Frank Oz. Together, they helped develop the Muppets’ first nationally known character, Rowlf the Dog, who appeared regularly on The Jimmy Dean Show from 1963 to 1966. Having established a group of talented collaborators, including producer David Lazer, Jim continued to pursue his career in puppetry and filmmaking. Between 1964 and 1969, Jim produced several experimental films including the award-winning Time Piece, Youth ’68, and The Cube. These projects expanded Jim’s knowledge of film techniques, leading to greater innovations with the Muppets.

In 1966, a public television producer named Joan Ganz Cooney, began work on a ground-breaking educational children’s television show called Sesame Street that would premiere in 1969. Based on Jim’s creative reputation, Cooney asked him to create a family of characters to populate Sesame Street. These characters-Ernie and Bert, Oscar the Grouch, Grover, Cookie Monster, and of course the 8-foot-2 Big Bird-continue to entertain and educate today, more than 35 years later. Working with Children’s Television Workshop (recently renamed Sesame Workshop) on Sesame Street, Jim also had the opportunity to continue experimenting with film techniques. Together with his talented team, Jim produced more than two dozen live action and animated shorts that are still teaching children how to count, learn the alphabet and master other educational concepts.

Sesame Street demonstrated the Muppets’ undeniable appeal to children, but Jim strongly believed these characters could entertain a much wider family audience. After years of trying to sell the idea for The Muppet Show™ in the U.S., Jim finally received backing from a London-based television producer, Lord Lew Grade. In 1975 production began at Grade’s ATV Studios, and soon the world was introduced to a new family of unforgettable characters, such as Miss Piggy™, Fozzie Bear™ and Animal™ (performed by Frank Oz); The Great Gonzo™ (performed by Dave Goelz); Scooter™ (performed by Richard Hunt); Lew Zealand™ (performed by Jerry Nelson); and Rizzo the Rat™ (performed by Steve Whitmire). Hosted by Kermit the Frog , accompanied by the musical meanderings of Doctor Teeth™ and the Electric Mayhem Band™, the Muppets were joined each week by an international pantheon of great guest stars, from Gene Kelly and Rudolph Nureyev to Steve Martin and John Cleese. The success of The Muppet Show naturally led to Hollywood, where the Muppets starred in six feature films: The Muppet Movie™, The Great Muppet Caper™, The Muppets Take Manhattan™, The Muppet Christmas Carol™, Muppet Treasure Island™, and most recently Muppets From Space™.

During the 1980s, in addition to making Muppet movies, Jim brought two remarkably original fantasy films to the big screen, The Dark Crystal™ and Labyrinth™. Inspired by the exquisite and intricate artwork of British illustrator Brian Froud, these films challenged Jim to create new kinds of three-dimensional characters with advanced movement abilities. In development for five years, The Dark Crystal utilized the talents of scores of designers, builders, technicians, and performers from across the globe. The result: a phenomenal showcase of puppetry and animatronics. Jim and Brian Froud collaborated again on the feature film, Labyrinth, which was produced by George Lucas, and starred David Bowie and future Oscar®-winner Jennifer Connelly. Like The Dark Crystal before it, Labyrinth gave Jim a unique opportunity to take animatronics and performance to a new level. The multi-talented staff that helped create these two films formed the basis for what is now known as Jim Henson’s Creature Shop™. Founded in 1979, with offices in London as well as Los Angeles, Jim Henson’s Creature Shop continues to set industry standards in animatronics, performance and performance technology.

Jim’s last project was MuppetVision 3*D, a short multi-media film and interactive attraction, which he directed and which currently runs at custom-made theaters at Disney’s Hollywood Studios theme park at the Walt Disney World Resort in Florida, and at Disney’s California Adventure in Anaheim, California.

On May 16, 1990, after a brief illness, Jim Henson died in New York City. With his keen ability for drawing together a strong team of performers, artists, and collaborators who shared his vision and creativity, Jim ensured that his work and unique creative vision would continue. Through The Jim Henson Company, his work continues to captivate and entertain a global audience. 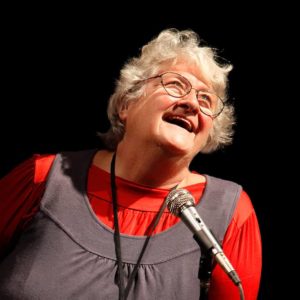 Jane Nebel Henson met Jim Henson in a puppetry class at the University of Maryland and soon after became an integral creative and business partner in what would become the world-famous Muppets.

As a fine arts education major studying at the University of Maryland in 1954, Jane Nebel shared with Jim Henson a unique approach to puppetry that is joyful and sophisticated. While still an undergraduate, Jim Henson was offered a spot on the local NBC affiliate in Washington, D.C., WRC-TV, and asked Jane Nebel to join him as a co performer and creator. The television show, Sam and Friends, which aired before The Huntley-Brinkley Report and The Tonight Show Starring Steve Allen, in Washington D.C., began to attract an enthusiastic audience. It wasn’t long before the Muppets were making special guest appearances on the top variety shows of the time. Their first national television guest appearance was on Steve Allen’s Tonight Show, the same show that Sam and Friends had preceded. Jane Nebel graduated in 1955, but continued working with Jim Henson at WRC-TV as a performer, puppet designer/builder, and business partner. In May 1959, Jane Nebel married Jim Henson at her parents’ home in Salisbury, MD.

In addition to her work on the Muppets, Mrs. Henson continued her studies in fine art at Catholic University in Washington, D.C. Years later, the family would live in Greenwich, CT, where Jane was assistant art teacher at the Mead School for Human Development. She continued her official association with The Jim Henson Company, and actively participated in the company as it became an important global family entertainment organization, collaborating with Jim Henson on a number of projects that included the traveling museum exhibit The Art of The Muppets, and The Muppet Show on Tour and Sesame Street Live arena stage shows. Known for her keen eye for spotting puppeteer talent, Jane also became the point of entry to the company for many top puppeteers.

Mrs. Henson also served on the board of The Jim Henson Foundation, founded in 1982 by Jim Henson to promote and develop the art of puppetry and presently headed by Cheryl Henson. Each year the Foundation introduces thousands of adults and families to puppetry through grant-making and public awareness efforts. Since its inception, the Foundation has awarded more than 675 grants to more than 300 American puppet artists for the creation and development of new work. In 1992, Mrs. Henson funded and founded The Jim Henson Legacy, to conserve, preserve and present the artistic contribution of Jim Henson. In 2001, Mrs. Henson created the Jane Henson Foundation, where she continued her philanthropic work.

Mrs. Henson also co-founded The National Puppetry Conference at the Eugene O’Neill Theater Center, where she displayed a notable talent for discovering new performers and supporting their work. Her association with the Eugene O’Neill Theater Center, the Union Internationale de la Marionette (UNIMA), Puppetry Guild of Greater New York, the University of Maryland Alumni Association, The Center for Puppetry Arts in Atlanta, GA, The Paley Center in New York, and The Smithsonian’s National Museum of American History has brought to Mrs. Henson many awards and honors.

Legally separated in 1986, Jim and Jane Henson continued to share their love of, and vision for, the Muppets. Jane Nebel Henson, always modest about her own contribution to the creation and success of the Muppets, would often speak to the public about Jim Henson’s body of work and how “Jim wanted to leave the world a better place.” According to Arthur Novell, the Trustee of The Jim Henson Legacy, “most would agree they both did.”