Jim was always on the look out for talent, whether for performers or for his workshop. He took time to learn about people personally rather than depending on the judgment of others. Taking advantage of a rare extended stay in New York in January 1978, Jim met with two people that would prove to be major additions to his team.

Steve Whitmire, performer of Kermit the Frog and Ernie for the past twenty years along with his own characters like Rizzo the Rat, was a young puppeteer from Atlanta working at The World of Sid and Marty Krofft, a local theme park. Caroll Spinney (Big Bird and Oscar the Grouch), met Steve at a puppetry festival and encouraged him to contact Jim who was looking for Sesame Street performers. Steve, then a very green 18 year old, flew to NY and spent a good part of the week talking and trying out puppets. Instead of Sesame Street, Jim decided that Steve should go over to London and join The Muppet Show cast. He performed a huge range of characters that first year, mostly in the background, and Jim was really pleased with his progress. Just a couple of years later, Jim said, “I think Steve has a sense of making a character a living [thing]. If you get a character that you can actually believe is a living, thinking, reacting creature, once you can work at that sort of level of believability, then it can grow from there.”

Along with The Muppet Show and Sesame Street, Jim was in the midst of getting his fantasy project, The Dark Crystal, off the ground. The core creative team was coming together in New York where designer Brian Froud would arrive for meetings starting on January 16th. The previous December, Jim had received an intriguing gift from his colleague Michael Frith: an exquisite Japanese-style marionette made by a young artist recently moved to New York, Wendy Midener. Jim immediately saw the potential of combining Wendy’s talent for sculpting dolls and puppets with Brian’s creative vision and called her in for the January 10th meeting. They talked about the project, and she was invited back for the first development meetings with Brian. Very quickly, The Dark Crystal became Wendy’s full time occupation, and by the time the production moved to London the following year, she and Brian were a couple. Notably, Wendy sculpted many versions of Jen and Kira and worked to translate scores of Brian’s drawings into three dimensions. The same year, she helped make Yoda for Star Wars and later was instrumental in the development of Jim’s second fantasy feature, Labyrinth. Today, the Frouds live in Devon, England in a 15th century house where they continue to make art. 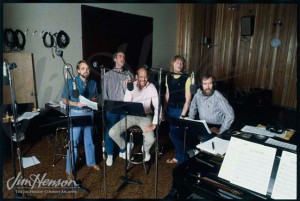 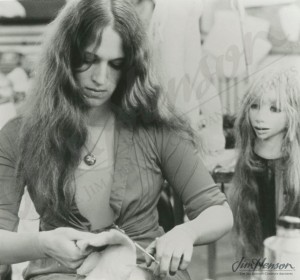 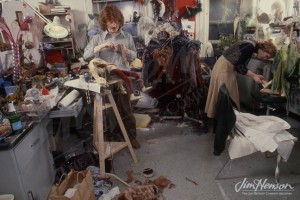 Brian Froud and Wendy Midener in the Henson Creature Shop.