In the post production period for The Dark Crystal, the whole company was busy with ancillary projects. Along with the Clothing Collection that debuted in November 1982 and several exhibits celebrating the artistry of the film, there were numerous publications, licensed products and a documentary in the works. Updates from Jim’s public relations head, Roberta Jimenez, ran to multiple pages, outlining all of these activities along with the international release schedule and an overview of press events.

Jim was naturally proud of what he had accomplished, particularly the realization of his dream of creating a whole world. Brian Froud produced a book, The World of The Dark Crystal, featuring his illustrations and text that detailed the creatures, settings and cosmology of The Dark Crystal without dispelling the magic by going behind the scenes on the production. A second book, The Making of The Dark Crystal, with text by Christopher Finch, was strictly about the nuts and bolts of the production, giving voice to the sculptors, designers, costumers, electro-mechanical experts, storyboard artists, performers, producers, and the myriad of other talent that came together to make the film. A storybook, novelization, and comic books followed.

In order to best tell his story, Jim was eager to apply the documentary format, enabling him to use his acute visual and aural senses to demonstrate how the creatures were created and performed. After discussions with NET, the public television station, it was decided that an hour long show, The World of The Dark Crystal, would be produced and air on PBS. The mind-boggling puppetry was allowed to shine – it was clear that Jim was deeply satisfied to be able to describe the complicated stilt work coupled with safety harnesses and cranes that went into the Landstriders or the intense scrutiny the flora and fauna received in consideration of the larger landscape. Jim also made a point of highlighting Frank Oz’s contributions as his co-director. Their longtime performing partnership allowed for a well-oiled collaboration. In today’s digital world, documentation of this hand-made feat is an important record of The Dark Crystal’s unique creative process. The World of The Dark Crystal documentary came together over just a couple of months and aired on PBS January 9, 1983, less than a month after the film’s premiere. 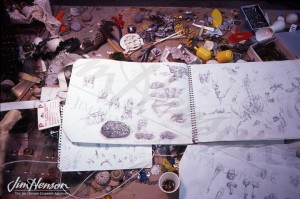 Brian Froud’s sketchbook on a worktable during The Dark Crystal build, 1980. 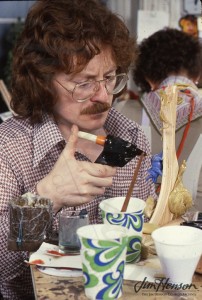 Brian Froud wielding a glue gun during the build of The Dark Crystal, c. 1980. 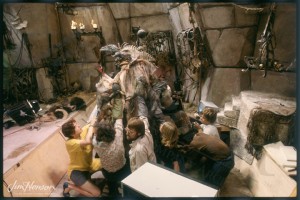 Collaborative puppeteering brings a Skeksis to life during The Dark Crystal shoot, 1981. 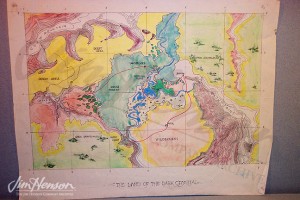 The map of the land of The Dark Crystal used to plan the action. 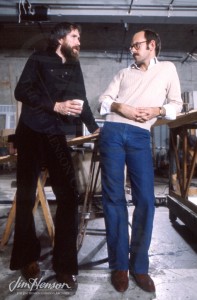 Co-directors Jim Henson and Frank Oz on the set of The Dark Crystal, 1981.