Brian Henson, the third of Jim and Jane’s children, was born at a momentous time in Jim’s career. The Hensons had moved to New York at the start of the year to accommodate a schedule of weekly Today Show appearances. That September, Rowlf made his debut on The Jimmy Dean Show, appearing regularly into 1966. Jim’s advertising work was in high demand, and the Muppets were popular on the variety show circuit. Within a couple months of Brian’s birth, the family of five (plus pets) moved out of Manhattan to Greenwich, CT.

Jim mixed his work and play, having his children to the set where he was shooting, bringing them to puppetry festivals and get togethers with others in the industry, or casting them in some small part. In 1969, Jim had five year old Brian act surprised when being presented with three green peas in the course of a lesson for Sesame Street about the number 3. Brian later appeared in a short film with another boy that depicted them mimicking construction vehicles as they ate ice cream. By the time he was 17, Brian had watched his father at work and spent time with his colleagues. Given real performing responsibility by his father for The Muppets Take Manhattan, Brian discovered a talent for operating a marionette rig, helping Scooter to ride a bicycle.

Within a couple years, Brian became indispensable on the sets of his father’s productions. He served as puppet captain for Labyrinth in 1985 while also performing Hoggle with Shari Weiser. He and Kevin Clash held audition workshops to gather puppeteers for The Storyteller, and Brian performed the expressive and curious dog. As a first time director, Brian shaped the Mother Goose Stories television series, and his reputation as a performer led to work on the films Return to Oz, The Witches, Little Shop of Horrors, and Teenage Mutant Ninja Turtles. Having started discussions with Jim before his untimely passing, Brian took the lead on the television series Dinosaurs.

Taking the helm of The Jim Henson Company in 1990, Brian directed and/or produced a wide range of projects including The Muppet Christmas Carol, Muppet Treasure Island, Farscape, Bear in The Big Blue House, Gulliver’s Travels, Muppets Tonight, and “Battleground,” an Emmy Award-winning episode of the Nightmares & Dreamscapes anthology for TBS. Currently, Brian oversees the groundbreaking work at Jim Henson’s Creature Shop, and was part of the team that first created and utilized the Henson Performance Control System, which won an Academy of Motion Picture Arts and Science Scientific and Engineering Award in 1992. That technology has led to the Henson Digital Puppetry Studio used to create animation in real time. Brian serves as Chairman of The Jim Henson Company and is an executive producer of the PBS KIDS series Dinosaur Train and Sid the Science Kid. With an interest in live theater, he created and launched the improv stage show Puppet Up!Uncensored which is currently touring. He also executive produced and served as a judge for the Syfy Channel’s Creature Shop Challenge and is gearing up for the third season of No, You Shut Up! on the Fusion Channel. 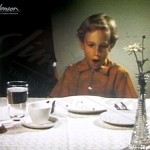 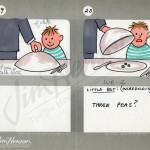 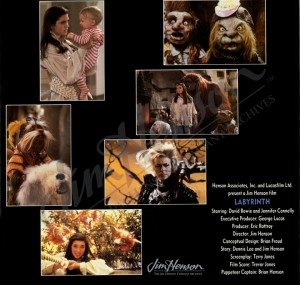 Marketing brochure for Labyrinth. Brian was Puppet Captain, and he performed Hoggle with Shari Weiser. 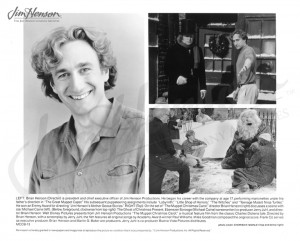 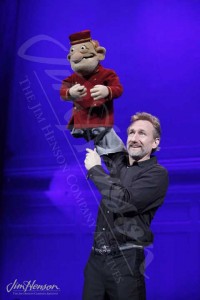 Brian performing in the improvisational stage show he created, Stuffed and Unstrung, 2011.