As a television and country music personality from Washington, DC, Jimmy Dean was well aware of Jim and his Muppets when he premiered his ABC prime time variety show in September, 1963. He invited Jim to be part of his second episode which was taped that August 29th. Jim (with Jerry Juhl and his new recruit Frank Oz) started with his piece “Cool Jazz,” an abstract bit featuring gloved hands dancing to music. Afterwards, Dean shook each of the four hands and then introduced his “Old Buddy” Rowlf for the first time. Bantering and making bad dog puns, the two introduced the Willis Sisters who sang “Moon River” with Rowlf to thunderous applause. Rowlf was not meant to be a regular, but appearing again, Dean told his audience, “Last week, we had an old hound dog buddy of mine with us…and he turned out to be the hit of the show. We’ve had all kinds of people asking us to have him back again…so what else can I say except…here’s Rowlf!”

Through the spring of 1966, Rowlf made weekly appearances on The Jimmy Dean Show and that summer, he toured with Dean to live appearances at various locations around the country. Over those three years, Jim had the opportunity to fully develop a character and create a believable relationship between a puppet and a real person. He also established his most important performing partnership with Frank Oz who performed Rowlf’s right paw while Jim performed the head, left paw and voice. They learned each others rhythms and performing styles, laying the groundwork for such seamless collaborations as Ernie and Bert, Kermit and Miss Piggy and the Swedish Chef. It was educational for all — Jerry Juhl sat in with the seasoned comedy writers on the show, and by the end of the run, was contributing much of Rowlf’s material and had a good understanding of writing for network television.

The show that Jim taped on November 18th, 1965 was one of several recorded outside the studio. Together, Dean and Rowlf played the Grand Ole Opry and the Louisiana State Fair and did a show in Miami. Playing Carnegie Hall with a full orchestra, however, was a big deal and required some sophistication. Wearing white tie, Rowlf joined Dean on stage, carrying his violin and offering up his rendition of Liszt’s “Hungarian Rhapsody” (actually played by the orchestra’s violin soloist). Rowlf’s enthusiastic fiddling to Dean’s frantic conducting reached a furious pace and ended in a dramatic upsweep, with Rowlf launching the bow into the air. It was a triumphant moment among many – Rowlf’s popularity with Dean opened doors to the first Muppet toys (plush Rowlf and Kermit puppets in 1966), a spokes-dog job at IBM, and a hosting job on a 1967 summer variety show, Our Place. 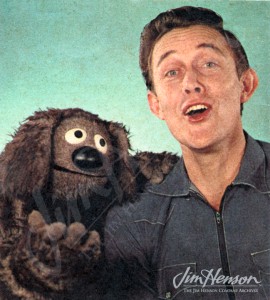 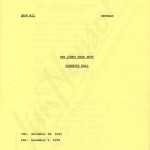 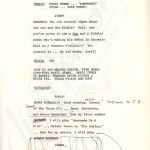 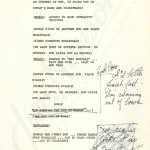 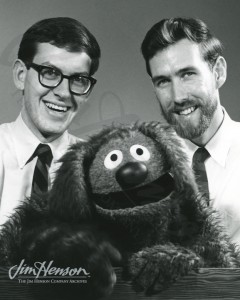 Rowlf with Frank Oz and Jim. 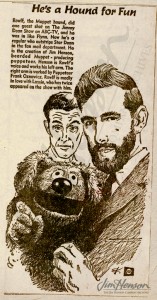 Jim and Rowlf get top billing in this Jimmy Dean Show press clipping.