With The Dark Crystal ready for its December premiere, Jim spent some time in November 1982 between promotional obligations getting up to speed on developments in the world of computer graphics. Jim was rubbing elbows with various people making advances in the field of special effects, like George Lucas and Dick Smith, and digital possibilities were the next frontier. He was excited about computers in general and was exploring a concept for a television special with a focus on demystifying computers for the general public. But it was the sophisticated hardware and software for digital animation, not the home computer, that Jim felt could have a real impact on his ability to translate his creative vision to the screen.

Jim started development of a series, Starboppers, with sophisticated themes relating to children’s emotional development and examination of their inner lives. Being able to address these types of ideas in a show aimed at young audiences was important to Jim, but perhaps more exciting to him were the technological possibilities for the show. He envisioned 3-D fleece and foam puppet characters appearing, for the first time, in a digitally rendered set. Performing on blue-screen, the Starboppers would move about in a virtual spaceship, and the images would be married on screen. While the show didn’t happen, Jim did use computer animation for the owl at the opening of Labyrinth and worked with CG designer Tom Barham on the animated opening sequence for The Jim Henson Hour later in the decade.

Learn about Jim’s explorations in the area of computer graphics. 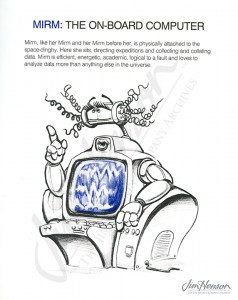 In the early years, Jim’s machine and computer characters tended to be well meaning but totally incompetent. By the 1980s, they got more respect as evidenced by this character idea for Muppet Voyager in 1988.