Jim became acquainted with George Lucas in England where he was making his Star Wars movies near to the studio where Jim taped The Muppet Show. They had obvious interests in common, and as development ramped up on The Dark Crystal in 1978, Jim’s team collaborated with Lucas’s on the creation of Yoda. They continued to stay in touch, and Jim attended the Return of The Jedi premiere in 1983. Jim was beginning to think about his next fantasy film at that point, but was also occupied with shooting The Muppets Take Manhattan, launching Fraggle Rock, and trying to sell his idea for a show called Starboppers. By the beginning of 1984, serious work began on the screenplay for Labyrinth. Jim met with David Bowie that summer, and creatures started to emerge from the London workshop. In August, Jim met with Lucas who agreed to serve as executive producer on the film. Lucas began attending script meetings and giving notes.

The following year, The New York Times featured their collaboration in an article by Aljean Harmetz. Lucas explained why he wanted to work with Jim: ”We both have merchandising operations and make children’s films and deal with fantasy. I’ve respected his work for a long time. Puppetry is an ancient and completely wonderful skill that doesn’t get the respect it should. Jim’s kind of like me – very quiet, kind of simple. And he’s kind, which comes through in everything he does.” Further into the article, Jim and Lucas discussed how they worked together: ”I’m strong with script and editing,” said Lucas. ”One of the reasons I got involved was that this picture doesn’t talk down to kids. I’ve been involved in one way or another in every story made in this genre for the last five years – ‘E.T.,’ ‘Return to Oz,’ ‘Dragonslayer’ and my own films. One contribution I could make to ‘Labyrinth’ was to keep the script focused. It’s a real trick to keep a script focused, to keep it from going for the amusing incident. Jim is receptive to ideas. I like to throw out a lot of ideas and not have anybody be threatened or get his feelings hurt.” Jim explained, ”George clarified the story lines. He cleaned up the structure so every scene has a function.”

Just before the shoot started in May 1985, Jim was asked, “How is that partnership working out? Here you’re two creative geniuses.” Jim responded, “Very nicely. We’re working on the story at this point together, and then…I’ll be directing the film and George will be doing a lot of the editing afterwards.” The film wrapped in September, and Jim showed the rough cut of his film to Lucas in San Francisco. Lucas came over to London to work on the editing and then met up with Jim again in New York to continue. By April, Labyrinth was ready for some test screenings, and on June 27, 1986, the film premiered.

Learn more about the development of Yoda. 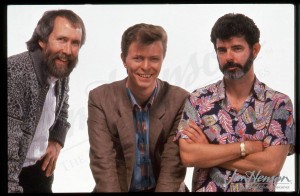