When Jim flew out to Los Angeles, he was no stranger to Emmy Award ceremonies. He won his first Emmy back in 1958 for his Washington show Sam and Friends and had taken home several more of the statuettes for his work on Sesame Street. The Muppet Show was popular with the Television Academy voters and had been nominated nine times, winning two awards by the time Jim and Frank Oz appeared on the 1979 telecast.

Awards shows are difficult to enliven for television audiences, so the producers of the Emmy program, looking for entertainment value, were eager to incorporate the Muppets into the proceedings. In 1977, the first year they were nominated, Kermit and Fozzie were assigned to present the award for Outstanding Writing of A Drama or Comedy Special – Adaptation. They made a joke about the difficulty they might have opening the envelope, given their physical limitations. Fozzie theatrically dropped it, coming up with the enclosed card (with some help from below), thus solving the problem. That year, Rita Moreno won for her performance on The Muppet Show.

The 1979 appearance featured Miss Piggy and Kermit in a much longer bit, starting the program with the standard reading of the rules. Miss Piggy was decked out in her red carpet finery, working under the assumption that she was hosting the show and presenting awards. Kermit explained their true purpose, adding “After all, how can you give out awards unless people know how they were nominated in the first place?” Miss Piggy replied, “Who cares…as long as I win!” She made some catty remarks about the real host, Cheryl Ladd, and burst into song. After more stalling, Miss Piggy finished the rules and left the stage complaining, “I bet Steve Martin wouldn’t have done it! The dinner better be good, I’m warning you…There goes my career, I just know it…I struggle for years to make it and I blow it in one lousy night! You only like these things ‘cause they have a green room backstage…” 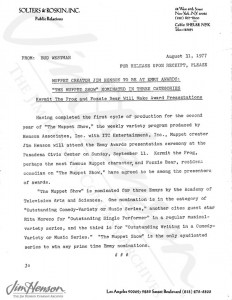 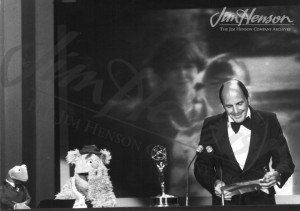 Kermit and Fozzie on the 1977 Emmy Awards show. 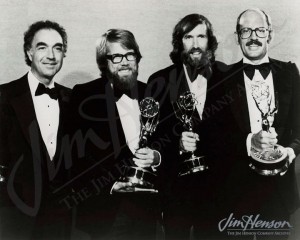 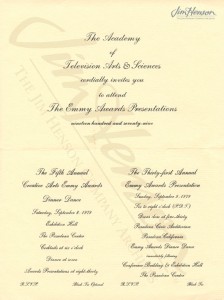 Invitation to the 1979 Emmy Awards Presentations. 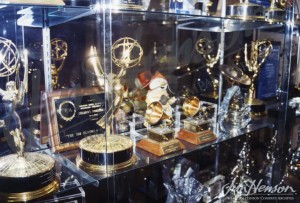 Various awards on display at The Jim Henson Company.