When production got underway for the second Muppet feature film, it seemed wise to start with one of the most complicated production numbers of this incredibly ambitious project. Along with water ballet, sky diving, and the precision of donning a tuxedo, The Great Muppet Caper was to include a musical scene featuring all the characters riding bicycles in the park while singing Joe Raposo’s melodious “Couldn’t We Ride.” Kermit had ridden a bike in The Muppet Valentine Show, Emmet Otter’s Jug-band Christmas, and most memorably, in The Muppet Movie, but this would be the first time multiple characters took to the road at once.

To make the scene believable, Jim planned to use whatever was in his arsenal – this included animatronics, radio control, and numerous shots from different vantage points. He also used marionette techniques, having used stringed versions of his characters over the years, dating back to commercials in the ‘60s and The Great Santa Claus Switch and The Muppet Musicians of Bremen in the early ‘70s. For the large marionettes in Caper, a special piece of equipment, an Iron Fairy crane, was needed to hold the puppeteers. Jim’s teenaged son Brian had a knack for this form of puppetry and joined the 110-member production team. He would go on to operate marionettes in many productions over the years.

In his application to be considered for a visual effects Academy Award, Jim detailed the work on the scene. Part of the challenge, he explained, was that, “…the puppet’s feet on the pedals had to turn in time with the beat of the music and both to be in time with each other and travel at realistic speed.” He went on, describing that there were three different types of platforms rigged to the crane. When Miss Piggy and Kermit rode side by side and then turned in two circles, the marionettists worked on two circular platforms. As the bicycles went into their circles, the crane stopped moving and the momentum was carried on by the puppeteers who worked around the outside of the platforms. Once the puppeteers got back to their start position, the crane started up and the bicycles continued on a straight path. Several additional paragraphs detailed the use of radio control for the heads, and the use of a tow rope from a large tricycle and variously sized trolleys for the group shots. Additional pages described six additional scenes from the film. Incredibly, the film’s only Oscar nomination was for the music. 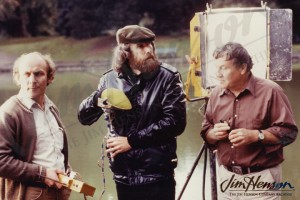 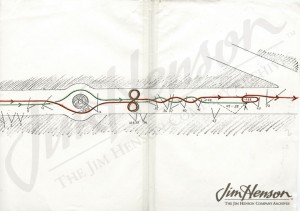 Map plan for the bicycle scene in The Great Muppet Caper, 1980. 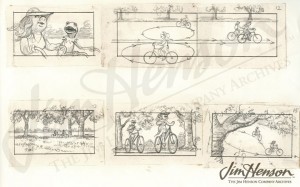 Storyboard for the bicycle scene in The Great Muppet Caper, 1980. 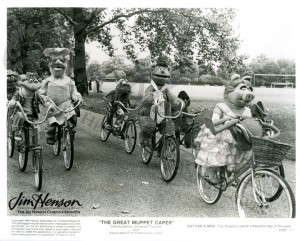 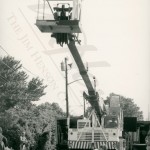 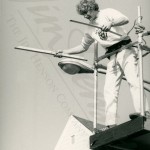 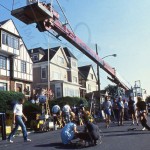 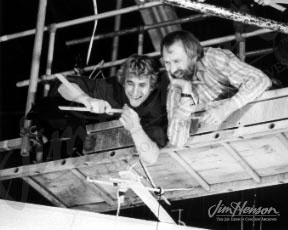 Brian Henson and Jim above the set of The Christmas Toy, 1986.