Jim was always interested in the next technological advancement to further express his creative vision, so it’s not surprising that he would seek out the earliest innovations in computer animation. For the second season of Sesame Street, Jim was contracted to make a series of counting films using a range of techniques. Some were live action, some were made using stop-motion animation, Jim painted under the camera to bring other numbers to life, and he worked with Maurice Sendak to produce two traditionally animated films. For numbers 4 and 10, however, Jim was eager to try a new analog computer system called Scanimate. Invented by Lee Harrison III in the late 1960s and built by the Computer Image Corporation in Denver, the Scanimate process involved back-lit high-contrast artwork that was mounted on animation pegs and scanned by a progressive scan monochrome camera. According to Scanimate chronicler Dave Sieg, those working on this technology were, “…an interesting mix of technicians and creative geniuses that understood the subtleties of color and motion that gave the work its real value.”

It’s unclear how Jim learned about Scanimate, but he had been interested in electronics in general and had used his Moog synthesizer to great effect on numerous projects. His colleague, Jerry Juhl, was an early adapter of computers and would have been intrigued with the process as well. Jerry wrote the scripts for “Number 4” and “Number 10” which Jim recorded the week before going out to Denver. The system allowed for the animation to be created in real time which made for an efficient production process. Jim arrived with the audio tracks and detailed storyboards in hand, and was able to complete the visuals for the film in just three days. While visually unimpressive in the context of today’s digital graphics, Jim’s Scanimate work was cutting edge in 1970 and an example of how he was always leading the way in the world of visual media.

For more information about the Scanimate computer animation system, go to: http://scanimate.zfx.com/ 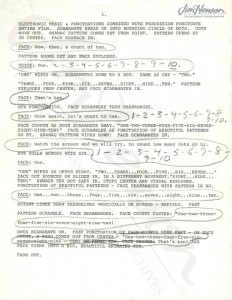 Jerry Juhl’s script with Jim’s directions and annotations for “Number 10”, 1970. 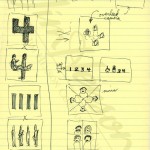 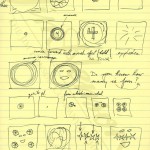 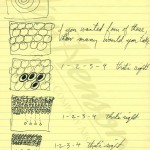 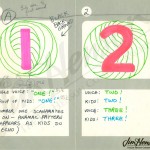 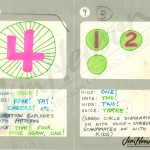