Fran Brill, Emmy Award winning puppeteer, actor, and voice-over artist, was the first female performer hired by Jim for Sesame Street. Since 1970, she has created many memorable characters, including Prairie Dawn and Zoe. Fran has also acted in films, on television, and on the New York stage, and has appeared in commercials and provided voices for several cartoon series. She recently shared her memories of meeting Jim:

I met Jim Henson in the spring of 1970. I had come to New York with a Broadway show the year before. Unfortunately, the show got mixed reviews, opened in a blizzard and closed after 41 ignominious performances. I then did some off-off Broadway showcases, performed in a few industrial shows and made a foray into the voice-over field. My daily routine was to hit the pavement and drop off my 8X10 glossy pictures at agents’ offices, hoping they would call some day and offer to represent me. It was pretty depressing. The highlight of my day was in the afternoon when I would return home and watch two television shows that would lift my spirits. One was Mr. Roger’s Neighborhood (which made me feel special), and the second was a brand new children’s television show called Sesame Street (which made me laugh).

One day I picked up Backstage (every actor’s favorite periodical) and there was an ad saying that Jim Henson was looking to train puppeteers for an upcoming Ed Sullivan Christmas special….and they were paying $75 a week to the attendees! On a whim, I called the Jim Henson Company explaining that I had no experience whatsoever with puppeteering but a meeting was scheduled soon after. I came to the company’s offices and there was Jim Henson, Frank Oz and a trunk full of puppets. I was struck by how tall and thin Jim was and that he spoke in an almost inaudible voice. His face was covered by a heavy beard and his demeanor was rather reserved and serious.

I was oddly calmed by his presence. I felt little anxiety auditioning for he was anything but intimidating. In fact, he made this “audition” feel relaxed and low-key and that we were collaborators already. We chatted for a few minutes, there were some scripts, I tried on a few puppets and miraculously came up with some characters. The three of us went off script and I remember that we laughed a lot. The event was very low-key and relaxed.

Of course, this was the way Jim operated. He was gentle, empathetic, worked with praise and encouraged you to the best of your ability. He created an atmosphere of fun and foolishness intuiting that in order to create and feel free one had to feel “safe.” 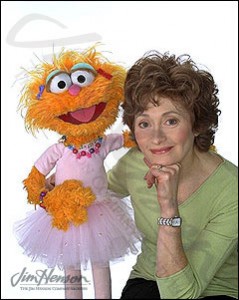 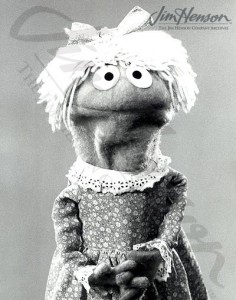 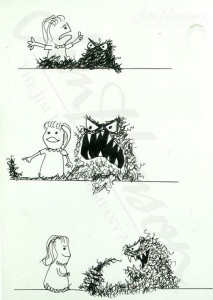 Jim’s idea of a little girl getting the best of a big monster, 1960s.