By the summer of 1965, Jim’s business was growing by leaps and bounds. Jane was busy with their four children, including a new-born, and the others, Jerry Juhl, Don Sahlin and Frank Oz were juggling to keep up with all the appearances, commercials, sales films, and the development of a Cinderella special. Jim’s other activities included developing Rowlf merchandise, work as a board member of the Puppeteers of America, creating a cow puppet that would work with Chroma-key for the Cloverland Dairy, and following up on interest in Time Piece. He would hire a couple of people in the fall to help in the office and on shoots, but that summer, he needed help fulfilling his commitments and called on his cousins, Barbara (aka Bob) and Rick Miltenberger to help out.

The Chicago-based Wilson’s Meat Company became an important client for Jim and launched his relationship with the Campbell-Mithun agency and their other advertiser, La Choy Chow Mein. Along with commercials featuring the characters Skip and Scoop in Wilkins style ID spots, Jim created two short films for the Wilson Company sales meetings highlighting the advertising campaigns and parodying the creative process. The first set of commercials and the first sales film was shot in August 1965. For the latter, Jim spoke reverently in voice-over about Muppets Incorporated while depicting scenes of a fictional shoot that seemed to be more of a wild party with music, girls and beer than a serious television production. It got great laughs from the sales force and led to a second campaign and an even more ambitious sales film the following year.

The work for the Carolina-based Claussen’s Bakery was a continuation of an ad campaign that had started the previous year with sixteen Wilkins-type commercials featuring Kermit and another character called Mac. The 1965 shoot, in color, would be for the final eight commercials for this advertiser and was featured the following January in Advertising Age.

See Skip and Scoop in a Wilson’s Meat commercial, 1966. 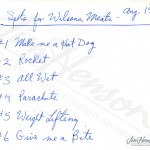 Jim’s list of commercials produced for the Wilson’s Meat Company in August, 1965. 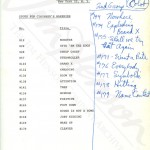 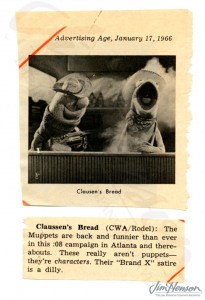 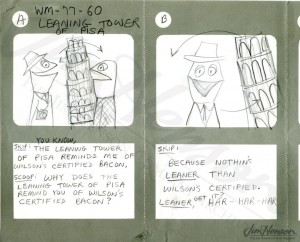 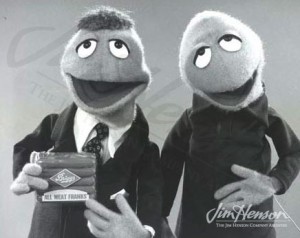 Skip and Scoop selling hot dogs for Briggs, a subsidiary of Wilson’s Meats, 1965.