According to Jocelyn Stevenson (co-creator and writer for Fraggle Rock), around 1980, she and Jim had dinner with record producer Milt Okun who mentioned that there was no general music education material for middle school children and thought the Muppets might take it on. Jim, an appreciator of all types of music, agreed and the Muppet music project went into development with Jocelyn at the lead. The original plan was very ambitious and was to include a series of videos, a television special, audio cassettes, books and even a specially-designed musical instrument. Research was done, meetings were held, but the project moved to the back burner for several years.

In 1987, the project was resurrected in the form of a television series, The Ghost of Faffner Hall with characters designed by Ron Mueck. Each episode featured a story about the ghost Fughetta Faffner in her great English mansion and her friends Mimi, Riff and the Wild Impresario as they attempted to foil the nefarious Farkas. Underneath each storyline was a music curriculum developed by Professor John Paynter, Head of the Department of Music at the University of York and his colleague, composer and music educator R. Murray Schafer. The puppet action was interrupted by live-action inserts featuring a wide variety of musicians and their work. Each episode featured two to four musical guests ranging from Dizzy Gillespie and Bobby McFerrin to the Scottish Chamber Orchestra and Los Lobos.

A co-production of Henson Associates and Tyne Tees Television, The Ghost of Faffner Hall was taped at Tyne Tees studio, in Newcastle upon Tyne, England. In the US, the thirteen episodes aired on HBO in the fall of 1989. Though short-lived, the series had some universal and timeless themes: music is communication, music has the power to transform, and anyone can make music.

See Mark Knopfler on The Ghost of Faffner Hall. 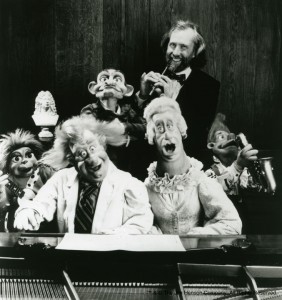 Jim and The Ghost of Faffner Hall characters in an HBO promo shot, 1989. 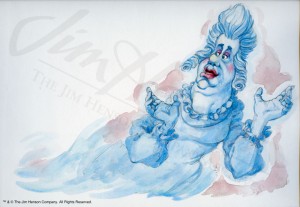 Illustration of Fughetta from The Ghost of Faffner Hall by John Percival, based on design by Ron Mueck, 1989. 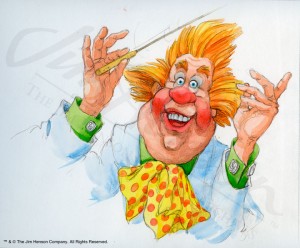 Illustration of The Wild Impresario from The Ghost of Faffner Hall by John Percival, based on design by Ron Mueck, 1989. 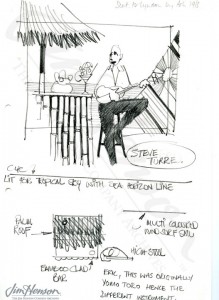 Set design idea by Ashley Wilkinson for musician insert of The Ghost of Faffner Hall. 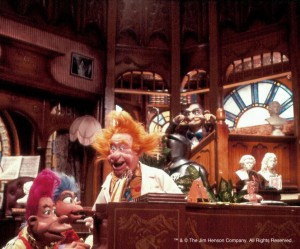