The strong audience reception for Jim’s The Muppet Valentine Show got the attention of the executives at ABC, opening the door to a possible Muppet series. The January 30th, 1974 airdate was followed in March by a meeting between Martin Starger, then president of the network. After several months of negotiations, Jim signed an extensive agreement that covered a variety of projects. These included a one-off Muppet special, an option for a Muppet series, a “first-class half-hour After School Special”, treatments for a 90-minute prime-time “Movie of The Week”, and general exclusive services of the Muppets on ABC programming.

First order of business seemed to be the after school special; the following week, Jim had lunch with ABC executive (and current inspirational speaker/writer) Squire Rushnell to pitch his idea. The result was a special called Out to Lunch which combined the casts of Sesame Street and The Electric Company with Elliott Gould, Carol Burnett and Barbara Eden. It aired that December during the evening, rather than after school. According to Jim, “The basic idea of Out to Lunch is that the entire staff of ABC-TV goes out to lunch, and all these wild people break into the studio and take over. It’s really a parody of commercial television.”

Work also began in earnest on what would become The Muppet Show pilot. Starting with a script that Jim developed with Marshall Brickman for a Broadway-type revue called An Evening with The Muppets, the two worked with Sesame Street colleagues Jon Stone and Norman Stiles to write the pilot script. It was titled Sex and Violence with The Muppets (Jim’s effort to make it clear that he could work for adult audiences), but researchers at ABC got negative reactions so the show was promoted as The Muppet Show. Characters were created and some were tested out on an appearance on ABC’s Herb Alpert Show that October. Finally, on March 19, 1975, the pilot aired. ABC did not pursue its option for a series and by that summer, Jim had moved on to CBS, appearing on The Cher Show and pitching to executives there. 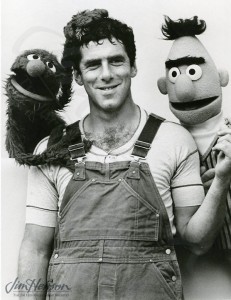 Grover, Elliott Gould, and Bert in Out To Lunch, 1974. Photo courtesy of ABC. 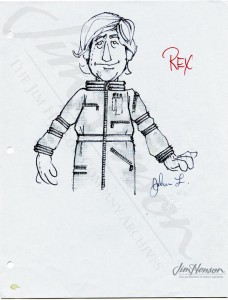 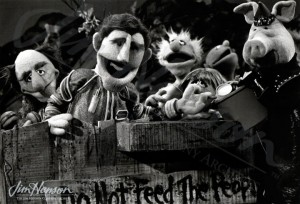 “Return to Beneath The Planet of The Pigs” still from The Muppet Show pilot, 1974. 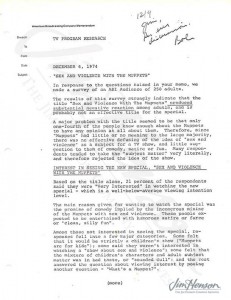 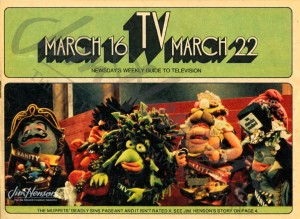