The Puppeteers of America annual festival meant that each summer Jim was able to meet like-minded people and new talent. The first one he and his wife Jane attended was in 1960 in Detroit where they encountered one of Jim’s inspirations, Burr Tillstrom, known for his television show Kukla, Fran and Ollie. Through Burr, they met master puppet builder Don Sahlin who would come to work for Jim in 1962 and become instrumental in establishing the distinctive look of the Muppets.

The following June, at the festival in Asilomar, CA, Jim made perhaps his most important discoveries: Jerry Juhl and Frank Oz. With a second child on the way, Jane was stepping back from performing, and Jim was eager to find puppeteers to fill the void. Frank was still in high school so not available, but Jerry jumped at the opportunity and moved to Washington to work with Jim that August. Starting as a puppeteer, he quickly took on writing duties, an area where he would make his greatest contribution. Of the gradual change to writing exclusively, Juhl once quipped, “I did it for self-protection. . . I never rated much [as a puppeteer] – so I figured I’d better save my job by doing something else.”

In Jerry, Jim found an ideal collaborator. Their comic sensibilities and overall sense of decency matched well, and together they developed characters, stories and worlds. Jerry provided depth for Jim’s performances and chose the words to match Jim’s visual imagination. Together, they developed dozens of film and television ideas, co-writing dramas like The Cube, building relationships on Sesame Street, overseeing the anarchy of The Muppet Show, and collaborating on screenplays, specials, and live shows. When Jim wanted to create a show to teach peace and tolerance to children around the world, it was Jerry that he tapped to lead the development of Fraggle Rock. And after Jim’s passing in 1990, Jerry made sure the Muppets continued to speak their distinctive language of caring and comedy, bringing them into the 21st Century.

Learn more about Jerry Juhl and Jim during that first year. 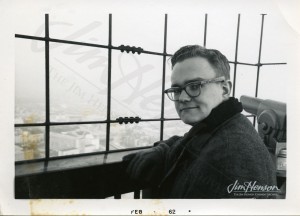 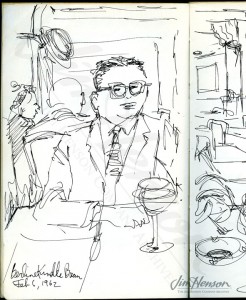 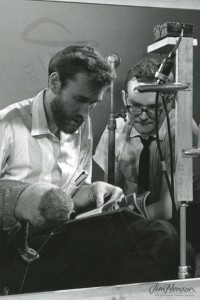 Jim and Jerry Juhl on the set of a Wilson’s Meat commercial, 1964. 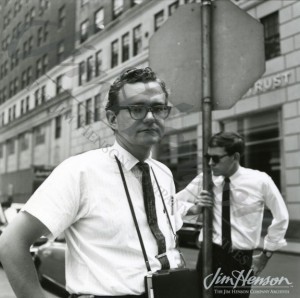 Jerry Juhl and Frank Oz on location during the Time Piece shoot, 1964.