In 1979, Jim purchased the building at 1b Downshire Hill in Hampstead, London to house the creature building workshop for The Dark Crystal. A former post office, it was a large open space with a high ceiling and mezzanines along the sides, ideal for creating over-sized puppets and experimenting with messy materials. The long development process for the film introduced a new team of artists and engineers to Jim and allowed them to invent all sorts of new ways of making puppets. By the time the film was finished in 1982, Jim recognized that the combination of his experienced and collaborative team with a central place for their work was a huge asset that should be maintained. He sought outside work to keep them busy until they were needed for his next fantasy project which turned out to be Labyrinth.

The first non-Henson project at the Creature Shop was creating characters for Dreamchild, a film written by Dennis Potter. Jim admired Potter’s work, particularly Pennies from Heaven, and was pleased to have a chance to work together. Jim wrote Potter after the premiere, “Your delightful script made the film a joy to work on. I feel proud to have my name on a picture of this calibre, and to be associated with your efforts.” The film was the story of the friendship between Alice Liddell (inspiration for Alice in Wonderland) and the Rev. Charles Dodgson (aka Lewis Carroll). Most of the film was live-action, but it featured a fantasy sequence with Henson-created characters based on the Alice books.

Designer Lyle Conway, having followed The Dark Crystal with work on the film Return to Oz, was tapped by Jim to oversee the shop for Dreamchild. Conway’s experience paid off and the build exploited everything he and the team had learned, using it in a much more efficient fashion. The budget was tight and, as Conway described, it “…turned out to be one fourth the work [of The Dark Crystal] at ten times the speed. We had 14 weeks to build everything, which is no time at all for us, and I think we stayed that much fresher as a result.” The film opened in summer 1985 to generally positive reviews, particularly for Coral Browne’s performance as Alice, and the writers made much of the creatures from Jim’s shop. The review in The Guardian noted, “The realization by Jim Henson and his team of the fabled creatures of Lewis Carroll’s imagination is beguilingly original.” 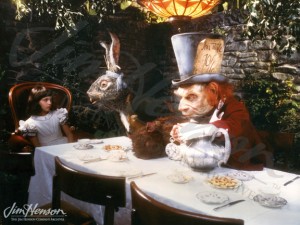 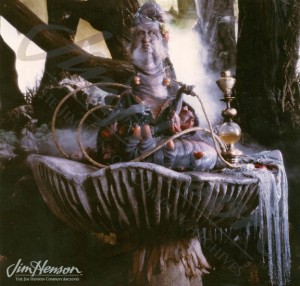 The Caterpillar from Dreamchild, 1985. 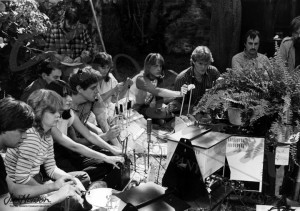 Puppeteers on the set of Dreamchild, 1984.