By early May 1968, when Jim was contacted by Bob Grannen at the Leonard Sive and Associates advertising agency of Cincinnati, his work in commercials had evolved from the quick, dynamic 8-second Wilkins Coffee spots to sophisticated campaigns with long-form 30 and 60 second ads. He was known for creating memorable characters that viewers connected with particular brands and was pursued for the impact his work had on the screen. To that end, the Kenner Products division of General Mills asked Jim to create a “Kenner-Bird” to enliven their campaign for their popular Easy-Bake Oven. In response to their initial phone conversation, Jim proposed, “…building a hand puppet bird and duplicate of it as a marionette. This would enable us to show it flying in mid-air, and then cutting in for a close-up of the hand puppet. I would prefer to use the puppet in connection with a real little girl. I think this makes both the puppet and the Easy-Bake Oven more real.” This was the approach he had used the year before with the Linit commercials, shooting both a hand puppet and a marionette version of Sir Linit. For La Choy, Jim used both the walk-around dragon and a hand puppet version to get the most believable interaction with the human actors.

In less than a month, Jim adapted the scripts, created the storyboard, designed the bird (who later became Little Bird on Sesame Street) and produced the commercial. Don Sahlin and Kermit Love built the puppets, and Jim’s regular cameraman Fritz Roland came in to shoot. Jim’s associate Barry Clark worked out the budget and schedule details, and Barbara Price was cast as the little girl. For truth in advertising purposes, Henson Associates was not allowed to overstate the actual size of the finished items “…through trick photography”, and they provided certification that all of the food shown had actually been baked in an Easy-Bake Oven. Jim was required to show the electrical cord and, ideally, outlet on screen to indicate the power source, and the words “Lightbulbs Not Included” were supposed to appear at some point. To discourage unsafe use, the child could not be shown sitting on or in the oven. Given Jim’s flexible creativity combined with his desire to make responsible television, these restrictions did not limit his ability to make appealing advertisements. 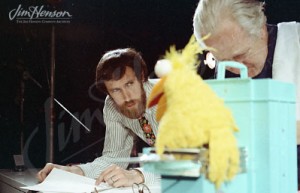 Jim on set of the Easy-Bake Oven commercial, 1968. 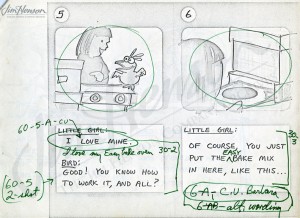 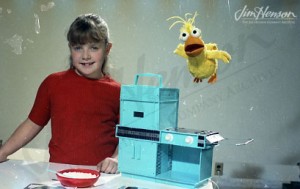