After a busy first year of marriage that included the daily Sam and Friends show, a myriad of commercials, the birth of their first child, and Jim’s graduation from the University of Maryland, the Hensons were ready for a vacation. A huge Disney fan, Jim was excited to finally visit the theme park in Anaheim that had opened five years previously. Intrigued by the possibilities presented by the art of animation and, perhaps, inspired by the work represented at Disneyland, Jim bought an animation stand and related equipment that month to try his hand at a medium beyond puppets. In his Bethesda, MD home workshop, he set up the gear, attaching his Bolex 16-mm camera to the stand, and immediately started to experiment on film.

Along with Walt Disney, Jim looked at the work of John Hubley, an early Disney animator and creator of Mr. Magoo. In the 1950s and ‘60s, Hubley was making experimental films using watercolor on wax, spraying cells, and other techniques. Jim also took particular interest in the work of Scottish/Canadian filmmaker Norman McLaren who had pioneered the technique of painting directly on film stock. McLaren’s work tried to demonstrate the abstractions he visualized as he listened to music. Many of Jim’s animation experiments from the early 1960s took a similar direction, using visuals to describe the aural and vice versa. While many of these film experiments were more for his personal satisfaction than for commercial use, Jim’s animated overlays for his “Visual Thinking” piece with Kermit and Harry was used on Sam and Friends and later Ed Sullivan. He tried moving cut paper under the camera and found it made a nice bridge between the action sequences in his film Time Piece. And Jim eventually made a variety of stop-motion, paint-under-camera, and computer animated films to teach counting on Sesame Street.

For an example of Jim’s stop motion work, see the #12 Rocks film created for Sesame Street in 1970. It won a Best Animated Film award at the First World Festival of Animated Film in Zagreb, Yugoslavia in 1972.

Here you can watch silent archival footage of Jim at his animation stand around 1961. 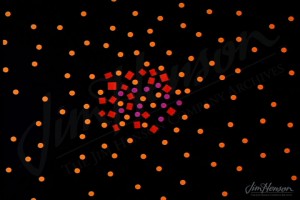 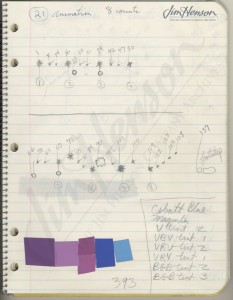 Jim’s notebook for charting the animation sequences in Time Piece, 1964. 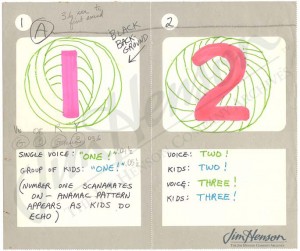 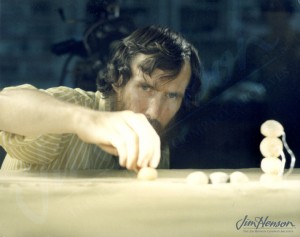