Beginning with the taping of the first Wilkins Coffee commercial in 1957, corporations over the years hired Jim Henson’s Muppet characters to sell milk, cleaning supplies, chow mein, and many other products. But when Jim Henson signed on to produce the first inserts for Sesame Street in September of 1969, his creations would be given even more important products to sell: The numbers 1, 2, and 3, and the letters A, B, and C. When the Children’s Television Workshop designed an educational show for pre-k children, they wanted Jim Henson to create characters that would reach out to young viewers, much the way his other characters reached out to consumers to sell products. At this point, Jim decided that he would not use any of his Sesame Street characters in corporate advertisements. He did not want to take advantage of his young audience by using their friends from educational television in a commercial setting.

Sesame Street became a success, and in 1976 The Muppet Show debuted, creating celebrities of Kermit, Miss Piggy, and the rest of the cast. Because they were on commercial television, rather than educational television like the Sesame Street cast, Jim felt comfortable using the Muppet Show characters in advertising when the product was a good fit. In 1981, the Muppets became part of a campaign for something that held a special place in Jim’s memories: the Polaroid camera. As a consistent early-adopter of new technology, Jim experimented with Polaroid cameras as early as the mid-1950s as a way to express his artistic vision. Part of his decision to allow Polaroid to feature the Muppets in their commercials and print ads was because of his early interest in Polaroid photography and technology. On May 30 and 31 of 1981, the Muppets filmed their first series of Polaroid commercials. In one, Kermit livens up a dud party by taking pictures with his OneStep Polaroid camera. In another, Fozzie receives a Polaroid for Christmas. And for a short 10-second spot, Kermit tells Miss Piggy not to “ham” it up for the camera, to which she replies, “Don’t WHAT it up?!?” The Muppets’ commercial appearance truly lived up to the tag line “Polaroid means fun.” 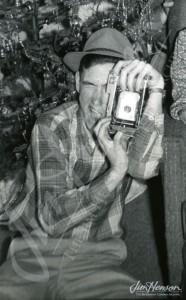 Jim taking a photo with his first Polaroid camera, Christmas 1956. 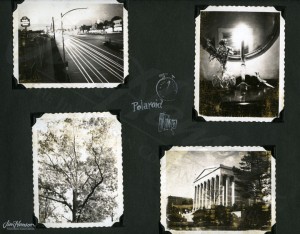 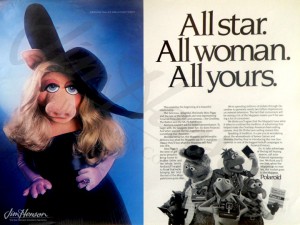