Jim Henson and Jane Nebel first met in the fall of 1954 in a puppetry course at the University of Maryland. As an art education student, Jane was required to take the course, and Jim, just starting with puppets on local television, was there for obvious reasons. Jim quickly recognized Jane’s talent as a performer and artist and asked her to work with him that spring. Romance followed a few years later, and on May 28, 1959, they were married at Jane’s parents’ house in Salisbury, MD.

While Jane had lived at boarding school and with college roommates, being married meant Jim would live away from home for the first time. To start their life together, he and Jane bought a house at 7300 Nevis Road in Bethesda, MD where they stayed until their move to New York in January 1963. Two daughters, and various pets joined the family during that period so the Henson house was a lively place.

Jim and Jane not only lived there, but they also set up a workshop for puppet building on the lower level. They were making television commercials and through 1961, they continued to perform Sam and Friends. Most of the characters on that show, including Kermit, had been made earlier, but some were built on Nevis Road. An August 15, 1959 cover story of The Northern Virginia Sun Weekend section features images of Jim and Jane in the house and documents the creation of a character named Theodore (aka Chicken Liver). Other characters that came to life in that downstairs workshop were those from Tales of The Tinkerdee (King Goshposh, Taminella Grinderfall, Featherstone, Princess Gwendolinda) and Onky, spokesman for On-Cor Frozen Foods. Perhaps the last character made in Washington was Rowlf the Dog. When Jim hired Don Sahlin to build the original Rowlf in late 1962, the work was most likely done at the Hensons’ home workshop. 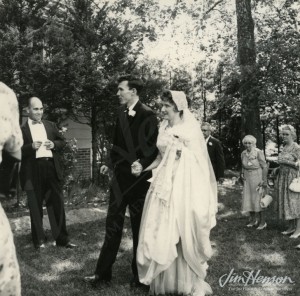 Jim and Jane Henson at their wedding, 1959. Photo by Del Ankers. 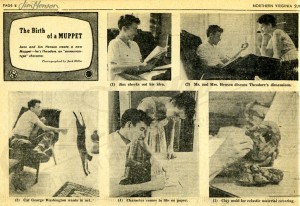 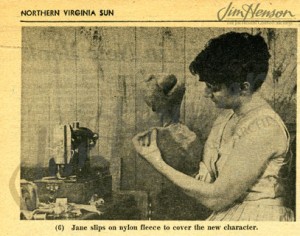 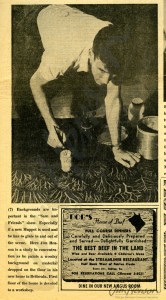 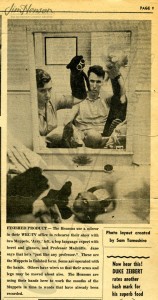