In the fall of 1967, Lisa and Cheryl Henson began attending their local elementary school, The North Street School, near their house in Greenwich, CT. For the annual spring children’s fair in 1969, Jim and his team put together a performance to entertain the girls, their schoolmates and their families. At the time, Jim was heavily involved in the development of Sesame Street so he was deeply interested in what engaged and entertained his children and their peers. Despite regularly performing on national broadcasts like The Ed Sullivan Show and The Tonight Show, Jim was happy to support his children’s school with a show and was gratified by the delighted response from the audience there.

Drawing on the pieces developed for his guest appearances on television, Jim worked out a varied program, highlighting a range of characters and songs. Jim performed the Southern Colonel who was transformed by removing his mustache, replacing his nose and other features. Each facial change brought a change in personality until he was back to his old self. They performed the abstract piece that Frank Oz created with dryer hose puppets to Herb Alpert’s song “Java”, and Jim’s extra-terrestrial bit Sclrap-Flyapp featuring alien creatures. Taking a page (several pages, actually) from an old Jimmy Dean Show script, Rowlf appeared and bantered with Frank who took on Jimmy’s part, leading to a favorite song, “Money”. And after performing the classic piece “Glow Worm” in which Kermit is eaten by the monster Big V, they finished with Kermit and a group of monsters singing the Woody Guthrie song, “So Long, It’s Been Good To Know You” with the customized lyrics: 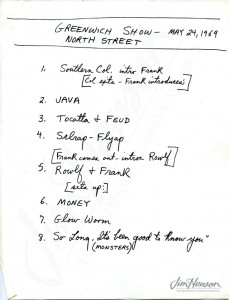 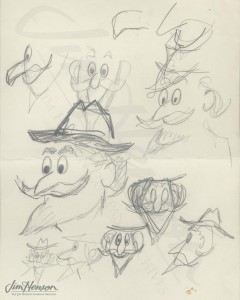 Jim’s design for the Southern Colonel, 1965. 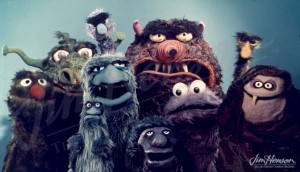