After four fantastic years making 96 episodes of Fraggle Rock, the production came to an end on May 15, 1986. The cast and crew, many feeling like they had done the best work of their lives, made sure to end with a bang, coming together at Toronto’s Sutton Place Hotel the following night for a wrap party and celebration. Everyone pitched in to create a memorable evening. Michael Frith designed the invitation, populated by frolicking Doozers. Jerry Juhl wrote a script for a video to feature the characters in post-Fraggle mode, discussing all the things they would do with the show behind them. He tried to somehow mention almost everyone who worked on the show in the script. Acknowledging how important each individual was to the success of the show, he said in a cover note with the script, “It is too long, and it STILL doesn’t contain references to all the people I’d like to include.” Along with the video, there was a brief live performance at the end. Fraggle composers Philip Balsem and Denis Lee wrote new lyrics to their song Is It True ending with:

“We’ll work together some tomorrow,
We’ll be together once again.
Don’t ask me how but we’ll achieve it – believe it,
We’ll be back, we’ll be new; we’ll be the same.”

Reflecting on those last days, Jerry Nelson (Gobo Fraggle) said recently, “We were all sad to see the end of the show, and most felt it was the finest collective work any of us had done to that date. I still feel that way.” In June 2002, the group got together again for a reunion in Toronto and celebrated their work together with songs, stories and good cheer.

Video: Jim toasts the Fraggle crew and they sing a song at the wrap party on May 16, 1986. 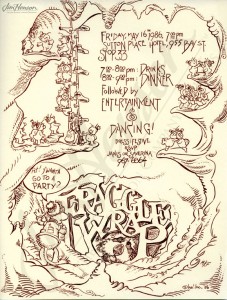 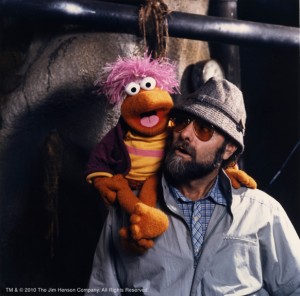