Once Jim Henson’s Creature Shop was firmly established in London after the end of Labyrinth production, everyone was eager to take advantage of the talent assembled. The shop had made the characters for the feature film Dream Child in 1984 and then in 1986, made a Koala for Qantas Airlines. Jim hoped to continue with these types of outside project as a way to keep everyone busy between Henson projects, but with the good response to The Storyteller pilot, it was clear there would be opportunities to continue with his own work in the UK. While the Creature Shop’s Henson work had, until that time, focused on feature films, several television projects were on the horizon and it was clear talent was needed for the eight additional Storyteller episodes, Greek Myths, Mother Goose Stories and The Ghost of Faffner Hall.

Brian Henson was chief puppeteer on Labyrinth, assisted by Kevin Clash. The two worked well together and had run a puppeteers workshop to cast the background puppeteers for the film. They knew a small group of performers but hoped to expand for the upcoming television productions. At that time, according to Brian, lots of performers listed “puppeteer” on their resumes, but their skills were really in the performance of animatronic creatures not hand-puppets. For the new television work planned, hand puppeteers were required. To identify people with potential and to develop a base of performers in London, Brian put out an open call. In response, hundreds of resumes poured in and were reviewed for the 1987 workshop. About 250 people were given auditions on the rehearsal stage upstairs at the Sadler’s Wells Theatre. Brian and Kevin narrowed the group down to about forty to start training and then reduced the group to twenty. By the end of the two weeks, about ten performers had been chosen for screen tests. Brian reviewed the footage with Jim and from a group that included John Eccleston, Alistair Fullarton, Mike Quinn, Marcus Clarke and others, they chose performers for the various projects shooting in the UK.

Puppeteer workshops and training have a long history at Henson. In 1970, Jim held a workshop to expand his puppeteer roster going into the production of The Great Santa Claus Switch – there he found Fran Brill and Richard Hunt. Brian ran workshops for both Dinosaurs and Muppets Tonight. Jane Henson held informal training sessions regularly over the years. Henson puppeteers routinely travel abroad to train puppeteers for the international co-productions of Sesame Street. And Jim, when he could squeeze it into his schedule, was happy to share his craft with puppetry students. During the summer after the London workshop, Jim and Brian went to the Institut International de la Marionnette in Charleville-Mezieres, France and spent a couple weeks teaching young performers and sharing their insights. 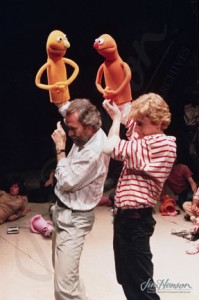 Jim and Brian conduct a workshop at the Institut International de la Marionnette in Charleville-Mezieres, France, 1987.