One of the benefits of success was that Jim had the means to drive whatever he wanted. While he did not collect cars, Jim enjoyed driving and liked sports cars. Each purchase merited a mention in his journal and became part of the photographic record. With his first earnings from Sam and Friends, Jim bought himself a white Thunderbird. He happily posed in it with Sam for a series of pictures. In 1960, Jim purchased a used Rolls Royce Silver Cloud to drive himself to his graduation at the University of Maryland and then with Jane and baby Lisa to the Puppeteers of America festival in Detroit. Subsequent car purchases included an Oldsmobile station wagon in 1961, perfect for Jim’s growing family, and for the first of several cross country trips, and around the same time, a Porsche Speedster. The family replaced the Olds with a Pontiac station wagon in 1966 and in 1973, Jim ordered his Jaguar XJ6. A Toyota joined the fleet in 1975 and the Jaguar got replaced by a BMW the following year. But the car that probably got the most attention was purchased in the UK during The Muppet Show era. For London driving, Jim was delighted with a 1978 Lotus Eclat, customized in Kermit green with headlights detailed to look like Kermit’s eyes. At some point, unfortunately, it was stolen and replaced by a Volkswagen Golf. At the end of his life, Jim was still driving the VW in London, the BMW in New York and a Hollywood-appropriate Mercedes 560SL convertible in Los Angeles, but, as Cheryl Henson remembered recently, “The Lotus was the best.” 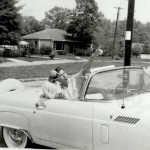 Jim and Sam in his Thunderbird in Hyattsville, MD, late 1950s. 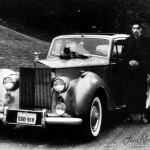 Jim on his way to graduation with his Rolls Royce Silver Cloud, 1960. 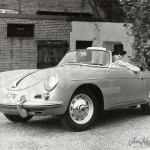 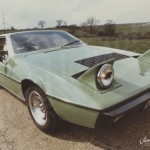