When The Muppet Movie was released in the June 1979, it was a critical and box office hit, catapulting Kermit and Miss Piggy into the realm of super-stardom. The Hollywood awards community, however, didn’t quite know how to define the picture in terms of what areas deserved nominations. The performers were much more than voice artists but since you couldn’t see them, should they get nominations as actors? Clearly it had spectacular effects (and did win a Saturn Award for best fantasy film), but there didn’t seem to be an obvious Oscar category that would appropriately celebrate the work in the film. The only area that seemed straight forward was the music, and Paul Williams’ score and his song with Kenny Ascher, “The Rainbow Connection”, were both nominated.

The Academy didn’t even consider the stars of the film, and while Kermit took it in stride, Miss Piggy was predictably upset – especially because her fans were so eager to see her suitably rewarded for her talent and hard work. Months before the movie opened, two Cincinnati marketing executives, Bruce E. Collins and James C. Hall, started a grass-roots campaign called The Committee to Award Miss Piggy the Oscar (CAMPO). With their tongues firmly planted in their cheeks, they put out a press release describing their organization and their quest on behalf of Miss Piggy. They urged fans to write in to their P.O. Box or to the Academy’s public relations firm, and explained, “First it was Mae West, then it was Marilyn Monroe. Never before had actresses captivated the nation’s attention with as much charm, dignity, and suaveness as did these two radiating individuals. Now in 1979 a new motion picture starlet is born, whose great talent and qualifications are unique in the movie field – and who rightfully deserves an Oscar in her bedroom in 1980. Miss Piggy is a legend in her own time (and definitively in her own mind).” Collins and Hall went on to describe Miss Piggy’s television work and their confidence that the upcoming feature film would be, “…Miss Piggy’s masterpiece…we do not even have to see the film to know who deserves the leading lady award.”

CAMPO got front page treatment in Ohio, and the UPI story got picked up around the country. Hundreds of letters of support poured in and journalists from as far away as London and Sydney did interviews. Collins and Hall contacted Henson Associates and explained their activities and asked to be allowed to sell t-shirts and buttons to promote their cause. Everyone at the company was fittingly amused and permission was granted. Michael Frith even created artwork for CAMPO to use and connected them with HA!’s apparel licensing partner. Momentum built, but the Academy Award committee held firm, insisting that the existing rules precluded Miss Piggy’s nomination. As a consolation (and to enhance ratings), she and Kermit were invited to appear on the telecast, explaining the very rules that kept them from being nominated. As least Miss Piggy got a new evening gown. 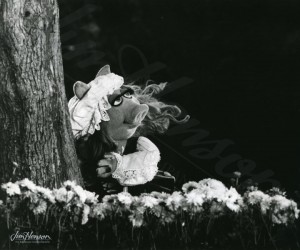 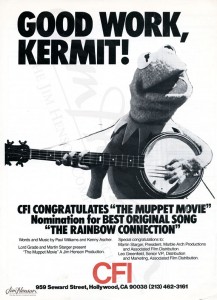 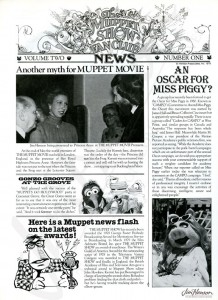