To sell Linit Fabric Finish, a spray starch-like product that gave home-laundered shirts a professional crispness, Jim, Jerry Juhl and puppet builder Don Sahlin created a knight character that promoted his brand in a pseudo-Elizabethan tongue. The charming Sir Linit, with his iron-shaped feet, skated across the ironing board, making quick work of wrinkled clothes for housewives around the country. Using Jim’s design, Don built a couple versions of Sir Linit. He was used as a hand-puppet for close-up shots and then performed as a marionette for wider shots. “Forsooth, one merely sprayeth and ironeth. The iron sticketh not and it scorcheth not,” he promised in several commercials. Any fair damsel stuck with the drudgery of ironing would quickly be rescued by the appearance of Sir Linit and a few sprays of Linit Fabric Finish.

The commercials came together pretty quickly. In early January 1967, ad executive Bill Ballard made a deal with Jim to make the commercials. Taken with Jim’s memorable characters in commercials for La Choy Chow Mein and Southern Bread, Ballard asked Jim to create a distinctive character that would be as closely related to the product as possible. He suggested building on his idea for “Linit-Man”, a “…johnny on the spot like a Minute man”. He asked that the color scheme reflect the product’s packaging, that the character could, perhaps, have a big “L” on his hat, and that his feet be shaped like irons. Jim and writer Jerry Juhl put their heads together and a couple of weeks later presented the idea of, “…a sort of parody of the White Knight, blowing his trumpet (always flat), and speaking with ‘forsooth’s’, ‘odds bodkins’, ‘whence cometh’, ‘hey, nonny nonny’, etc.” The agency liked it and gave the go-ahead to build the character. Jim had an unwavering idea of what a knight should look like – drawing a similar one in a cartoon as a teenager and later designing them for his “King of Eight” film on Sesame Street – and made the clear connection to the product by making the body and head in the shape of a Linit can. Ballard’s idea for iron-shaped feet stuck, and by the beginning of March, they were ready to shoot the commercials. 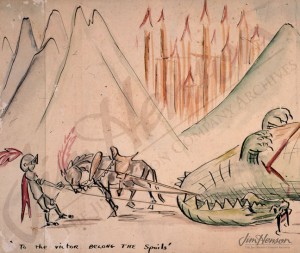 Jim’s cartoon “To The Victor Belong the Spoils” from the early 1950s. 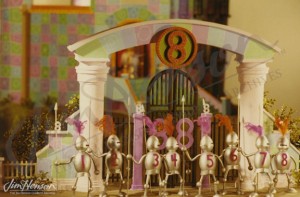 The knights from Jim’s Sesame Street counting film “The King of Eight”, 1970. Note their iron-shaped feet. 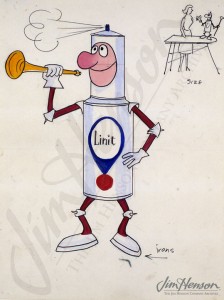 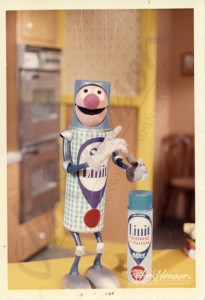