At the same time Jim and his team were recording the music and working on the overall post-production for The Great Muppet Caper, Dudley Moore and Lily Tomlin came to London to tape a television special to promote the film, The Muppets Go To The Movies. The hour-long special celebrated (via parody) movie classics, reflecting Jim’s effort in Caper to capture the energy and excitement of the great films of the 1930s and ‘40s. Moore had guest-starred on The Muppet Show and traveled in the same comedy circles as Muppet writer Chris Langham so would have felt right at home at ATV studios where the special was taped on the regular Muppet theater set. Lily Tomlin’s Muppet connection went back to the mid-1970s when she appeared on Saturday Night Live, singing with Jerry Nelson’s character Scred. With a script by Jerry Juhl, Chris Langham and “Gummo” (Jim Henson), Kermit hosted and short clips from Caper were interspersed with a range of parodies of movie genres including war movies, monster movies, classics like The Wizard of Oz and Gone With The Wind, and even (in a nod the sophistication of the audience – or at least the writers), the Swedish avant garde.

In his usual fashion, Jim wrote warm thank you notes to his guests. To Tomlin, he thanked her for, “…the caring, the involvement and for giving so generously of your unique brilliance.” To Moore, he said, “It feels like you’re family now…Your very great talent is matched by your patience and your warm loving personality.” Their performances did not go unnoticed, and critics lauded the whole production. In The Hollywood Reporter, Gail Williams gushed, “The Muppets Go To The Movies is a klieg light among this TV season’s generally dim variety specials. This…presentation has everything an enjoyable variety special needs to shine.” She detailed her delight in everything from the script and comedy to the special effects and art direction, saying that, “Deft staging and technical execution once again create the illusion that the Muppets are breathing beings moving at will in any direction they please.” 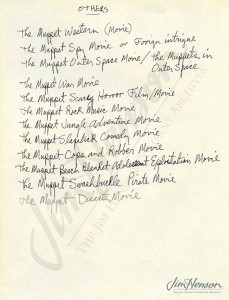 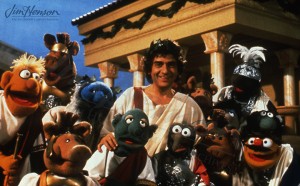 Dudley Moore in The Muppets Go To The Movies, 1981. 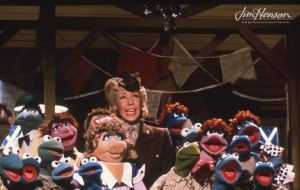 Lily Tomlin in The Muppets Go To The Movies, 1981.