When Jim sat down at his dad’s house to watch the pilot for The Muppet Show, it marked a major step in a long effort to get his characters their own show in prime time. From the beginning, Jim Henson dreamed of a musical variety series featuring the Muppets. In 1960, he made notes and sketches for a hypothetical show called The Zoocus. Elements of the show included sets with arched colonnades, the appearance of a celebrity guest host, and, of course, a repertory company of puppets led by Kermit. All of these would materialize more than fifteen years later on The Muppet Show. While The Zoocus was never produced, Jim continued over the years to try to sell his concept.

He circulated several full-scale proposals starting in 1968. Over the next five years, several variations went out, all with the same general format first envisioned for The Zoocus. When the idea for a series wouldn’t sell, Jim circulated proposals for various holiday specials. Finally, in 1974, The Muppet Valentine Show with Mia Farrow aired on ABC to great success. That December, the pilot Jim would watch in Albuquerque, The Muppet Show: Sex and Violence, was taped. It had the putting-on-a-show format that became integral to the series, a Muppet emcee (in this case, a character named Nigel rather than Kermit), but no celebrity guest. While some of the characters came from the Muppets’ existing troupe, several were created specifically for the show with the idea that they would become regulars on a series. The most memorable are the members of the Muppet band, The Electric Mayhem, and the two old men hecklers, Statler and Waldorf.

Despite the good reviews for Sex and Violence, Jim Henson still struggled to find someone to back a Muppet series. Help eventually came from London impresario Lord Lew Grade who agreed to finance the show, as long as it was taped in England. Production began there in January 1976, and the show went on the air on September 20, 1976. At the height of its popularity, The Muppet Show had more than 235 million viewers in over 100 countries each week. 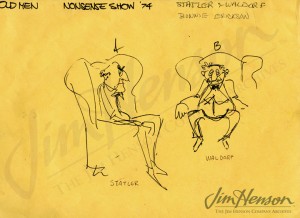 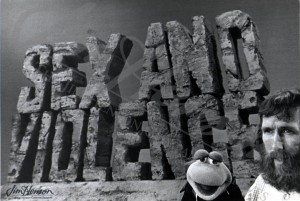 Jim Henson and Nigel on the set of The Muppet Show: Sex and Violence, 1974. 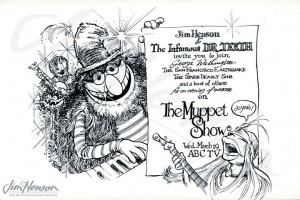