Comedic duos have always been an essential feature in Muppet productions. Antics between Bert and Ernie, Bunsen and Beaker, Statler and Waldorf, or Kermit and Fozzie provide humor while still revealing strong friendships between them. In Louise Gikow’s June 27, 1989 interview of Jim and Michael Frith, both noted the significance of the creative process when forming dynamic puppet pairs. Puppet teams may have visual elements that complement each other (for instance, Bert’s vertical stripes and Ernie’s horizontal ones), but according to Michael, they should also have “two personalities that bounce off of each other quite nicely.” These comedic pairs, he said, are always “slightly at war with each other but neither can get along without the other. And I think this has always been true of great comic duos.”

In September of 1987, Henson Associates (to adopt the banner Jim Henson Productions one year later) used the notion of the dynamic duo as the theme for a character design contest for university students. Spearheaded by Will Morrison, director of the Muppet Workshop, with Michael and Jim, Henson Associates sent contest announcements to universities inviting students in the fields of art, design, theater, and computer technology to design two-puppet teams. They could utilize any material they wanted, and the puppets could be 2D or 3D. The goal of the competition, according to Will’s memo to the company, was to “encourage creativity and bring [Jim] into contact with new talented designers.” The top five contestants won a trip to New York City for a character design workshop with the Henson Muppet makers, which the company decided would be a much more unique prize than a cash award. This was also a chance for the creative team at Henson Associates to get to know new and emerging talent in the field of puppetry. The contest ran for three years, with winners announced in the spring of 1988, 1989, and 1990. The top winners from each year are listed below. 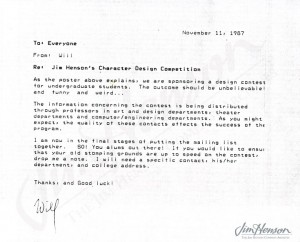 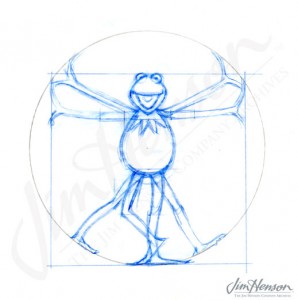 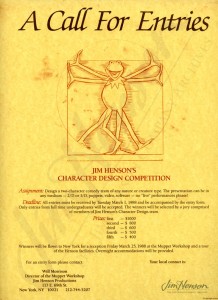