Not only was the Fraggle audience in many countries on multiple continents, but so was the writing staff. This led to perhaps the first use of nascent internet-type communications in creating a television show. Many ground-breaking animatronic and puppet technologies were developed for the production, but it was the digital communication that made the creation of the Fraggle world possible on the most basic level. The development of the characters and their stories gave the show its center and, for the early 1980s, happened in an extraordinary way.

According to Fraggle writer Jocelyn Stevenson, “Jim was a very canny boss [and] said, ‘I don’t care where you live – as long as you get the work done.’” Given that she had recently moved from London to Wales, head writer Jerry Juhl was living in the small coastal California town of Cambria, producer Larry Mirkin and the production itself were in Toronto, and Jim was New York based, there was a big incentive to find a way to make it work. Larry Mirkin explained that Jerry, as an Apple enthusiast (fanatic, really), “…figured out that there was a way to send data through phone lines. It was slow by today’s standards, but incredibly fast compared to having to send things by mail or courier, which was also expensive.” There were many limitations – only 8-10 pages could be sent at a time and took about 30 minutes to transmit, there was no script-writing software and there wasn’t compatible software for the Apple computers and Larry’s PC so formatting would disappear, there were big time differences but the transmission had to be monitored to insure success so it couldn’t happen overnight, and practically nobody was doing this so there was no technical support to call on. Jocelyn remembers, “At one point, I was looking for help connecting my modem to my computer and took it all into the pub in this little, rural hamlet where we lived. There were several old farmers sitting at a table drinking, and I asked them if they knew how I could connect this to that. They looked at the computer, the modem and the cable – furrowed brows – air sucked in between clenched teeth – tut tuts – and then one of them looked up at me. ‘Solder it?’”

Jocelyn did get her connection set up and after ensuring that no one in her household would try to use the phone lines, she would put the phone receiver into a rubbery cradle and with lots of beeping noise, the transmission would begin. Larry or Jerry or the NY office would be doing something similar on the other end, and they were able to function in a way that was very new at the time but has become a routine part of our lives in the 21st century. “The truth is,” Larry explained, “… rudimentary as this was, we couldn’t have done the show without this form of collaboration that the technology provided for us.” Jocelyn reflected, “In the end, it wasn’t really that complicated. Five or six easy steps. I offered to write British Telecom a pamphlet telling people how to do it, but they scoffed. They thought I was a lone lunatic.” 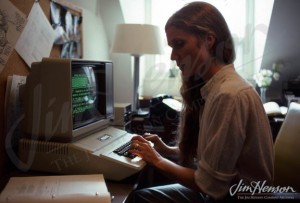 Jocelyn Stevenson in the UK writing a Fraggle script on her Apple computer, 1980s. 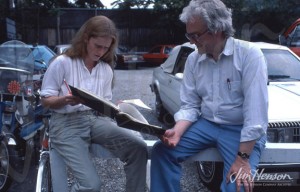 Jerry Juhl and Jocelyn Stevenson work together on a script in person, 1980s. 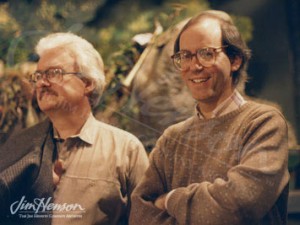 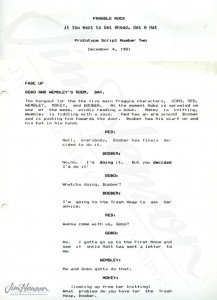