On the long road to The Muppet Show, one appearance stands out as a major step in the right direction. Jim may not have known it when his agent Bernie Brillstein booked him on a television special starring singer Tom Jones, but that 1971 appearance would be a harbinger of what was to come. This was Jim’s first trip to London – little did he know he would be living there while producing his 120 episode series just five years later.

Martin Baker, who has produced numerous Muppet projects over the last forty years, worked on Tom Jones’ show at the time and had responsibility for coordinating the guests’ travel. He contacted Jim to arrange for a limo to the studio in Elstree outside London and was surprised when Jim suggested that he and Frank Oz would take the train. As Martin remembered, “My jaw dropped as to have a guest star refuse limo service…to say the least, it was pretty unusual.” Baker managed to convince Jim to let him pick him up at the station, and so began a long and fruitful working relationship – when Jim and Frank appeared, climbing up the station stairs carrying large black puppet boxes, Baker immediately got a sense for Jim’s unassuming and modest nature that would inform his dealings with his collaborators throughout his career.

The special, variously called This is Tom Jones, Tom Jones…At Fantasy Fair, and Music from London, was produced by ITC (Lord Lew Grade’s company) and aired on ABC. It helped executive Martin Starger at ABC learn more about the Muppets, warming up the network for the broadcast of two Muppet Show pilots in 1974 and 1975. Lord Grade also got a taste for Jim’s work, eventually backing his series and The Muppet Movie. Even some of the production staff working in the studio, like Martin Baker, would end up on The Muppet Show team. And Tom Jones’ guest Connie Stevens worked so well with Kermit and Rowlf on the special that she was an obvious choice to be one of the first celebrity guest stars on Jim’s show, taped in January 1976.

Recognizing the opportunity for future work with ABC, Lord Grade and the others, Jim pulled out all the stops for Tom Jones, performing his most popular characters and sketches – Rowlf, Kermit, “Mahna Mahna”, “Glow Worm” and “Visual Thinking”. The show got positive reviews, heartily crediting the Muppets. Colette Wood wrote in The Hollywood Reporter, “Anytime you have the Muppets guesting a show, you can be pretty well assured of the success of it.” She went on to compliment the rest of the special’s production team and human performers, but clearly the Muppets were the stars. 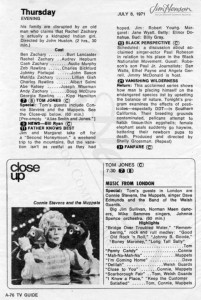 Listing and image for the Muppet appearance on the Tom Jones special in TV Guide, July 8, 1971.