As happened with Rowlf the Dog and later with Cookie Monster, many Muppets got their start in television advertisements. In the case of those two characters, puppets were built and performed in commercial shoots. Other times, however, Jim came up with a design but didn’t end up constructing the puppets. In 1963, Jim designed a large walk-around bird for the Stouffer’s frozen food company. The commercial did not get made, but Jim kept the drawing. When he was asked to create a character to roam Sesame Street in 1969, Jim revised his design and created Big Bird.

The population on Sesame Street benefited from another unrealized commercial character design. In early 1969, Jim was approached by advertising executive Ted Bates on behalf of his client Mars, Inc. about making a commercial for Sprint Wafers, a treat that was a combination cookie/candy bar. The split personality of the product inspired Jim to suggest a two-headed creature, one who thought Sprint was a cookie and the other who thought it was candy. Jim had made a two-headed monster before, but this one had an added element of contrast – one head would have a sort of smokestack at the top that would let out a “toot” to punctuate his speech, while the other had a light bulb on top and would make a “ding” sound to accompany his words. In the end, humanoid characters were created for the commercial instead, but Jim used his idea later. Sesame Street features both a two-headed monster (without sound effects) and, since 1981, two types of single-headed characters clearly descended from the Sprint monster design: Honkers (who honk rather than toot) and Dingers.

See Jim perform Ernie with the Honkers and Dingers on Sesame Street. 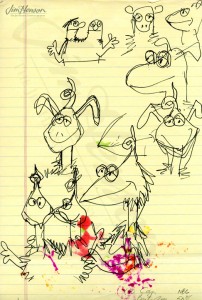 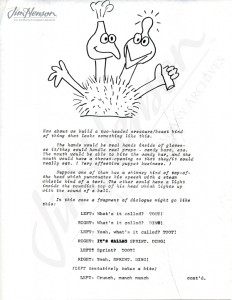 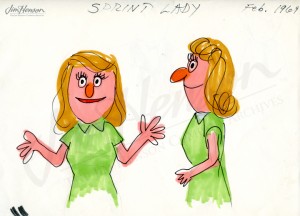 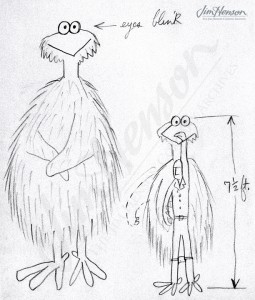