Jim’s NBC Experiment in Television: Youth ’68 combined filmed interviews of the man on the street with those of music celebrities, famous quotations read and recorded in a studio, and musical numbers illustrated with innovative film techniques. The real heart of the show was interview clips featuring America’s youth juxtaposed with those featuring the older generation. Within those groups, the contrast between urban/coastal and those from the rural heartland was impactful and telling about the conflicted feelings in a changing society.

To get his sound bites, Jim had an ambitious travel schedule, organized by his associate producer, Barry Clark. Clark had done extensive scouting of the locations and assessed the general mood of each spot to guide the interview process. About Omaha, Clark wrote in his planning notes, “To look cool in Omaha, one wears a loose sport coat, slacks, and a crew cut. Or else an air force outfit covered with General’s decorations. And eat a lot of steak, be ruddy-faced and hefty, laugh and sing a lot, and be sociable to unattractive women. Be sports-minded, in a word.” He added, as a warning to Jim, “You will feel grossly uncool in Omaha.” About the scene in San Francisco, Clark wrote, “Free love and political activism are big here, and legal aspects of war and pot and censorship.” His advice to Jim, “Questioning should be enlightened.” In thinking about what to film, Clark noted that they could get good, “….footage of hippy communism and lethargy along Haight St.,” however, “This is a lot grubbier and sadder than Hollywood Flower People movement.”

Having shot the studio quotations and dance numbers in February, Jim returned from his travels and got the last of his on-the-street footage on March 28th. Scenes of urban loneliness were captured on West 48th Street and in Times Square in the morning. After lunch, Central Park provided the background for “lyrical shots”, “angry SDS spokesmen” and, “Flower People…talking softly of hope.” Jim then had less than four weeks to put it all together, choosing clips, adding music, editing the dance numbers, and making it all flow. It went on the air to great critical acclaim, and the fan mail rolled in, mostly extremely positive but with a few from unhappy viewers. 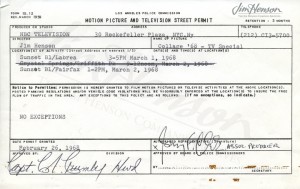 Jim’s location permit for Los Angeles. He filmed just down the block from the Henson Company’s current home. 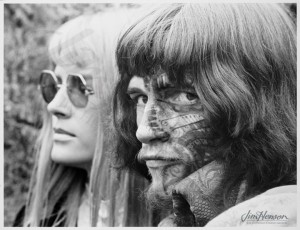 Some of the youth represented in Youth ’68. 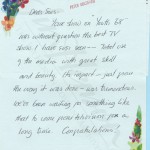 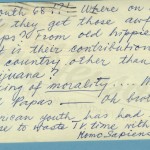