Jim made commercials for numerous food products in the late 1950s and early 1960s, but it was the request from General Foods Canada to make a test commercial for their snack products Wheels, Crowns and Flutes that inspired Jim to come up with a way for his characters to eat convincingly on camera. The monster from Sam and Friends, Yorick, ate all sorts of things – and creatures – through a tube that went down through the puppeteer’s sleeve, but he just bit at things with his mouth rather than placing the food into it. In 1962, Jim started making live-hand puppets that were able to pick things up themselves which proved invaluable for a believable performance. Instead of a rod controlling the hand, which required stopping the camera every time the character wanted to pick up something, the hand was glove-like and the performer wore it, enabling him to just grab the item and, for this project, stuff it in the monster’s mouth.

The idea of the General Foods commercial was that the Wheel-shaped, Flute-shaped and Crown-shaped snacks were so delicious that they would attract voracious monsters to any home where they were served. Jim needed to design a Wheel Stealer, a Crown Grabber, and Flute Snatcher to cast this commercial. Each needed to be a different shape (like the snacks) and at least one needed to convincingly eat the product. Jim sketched out ideas and came up with three characters. The design for the Wheel Stealer showed a big-eyed, furry character with shaggy hands and Jim’s notation, “able to feed himself”. Don Sahlin, Jim’s puppet builder, combined the tube function in the sleeve and the live-hand arrangement and came up with a character that could, indeed, feed himself. A more vertical design was used for the Crown Grabber, and the Flute Snatcher was a pointy-nosed sneaky-looking character. While this test commercial did not result in one that actually aired, these characters were put to use in various other ways. The Flute Snatcher and the Crown Grabber (whose name became “Beautiful Day Monster”) were used in variety show appearances. But it is the Wheel Stealer that has enjoyed the longest life – evolving into our favorite eater, Cookie Monster.

Before his debut in 1969 on Sesame Street, Cookie Monster had several incarnations. First, of course, he was the Wheel Stealer. This purple-ish hungry character was also used in early 1969 as Arnold the Munching Monster for a Frito-Lay Munchos commercial. A green version ate up a blinking machine on Ed Sullivan’s show and devoured a computer in an IBM meeting film. Ultimately, he was remade in blue without teeth and continues to be the friendly, insatiable Monster on Sesame Street and recently as a surprise guest on Saturday Night Live.

See the Wheels, Flutes and Crowns test commercial from 1966. 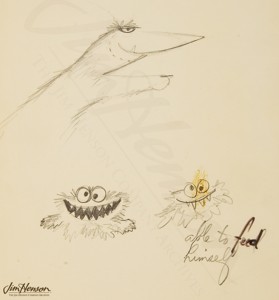 Jim’s original design for the Wheel Stealer and the Flute Catcher, 1966. 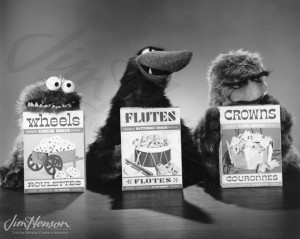 The Wheel Stealer, the Flute Catcher and the Crown Grabber, 1966. 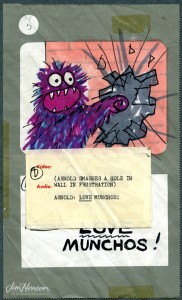