“There’ll be spectacle, there’ll be fantasy, there’ll be derring do and stuff like you would never see…Hey! A movie! Yeah! We’re gonna be a movie starring ev’rybody — and me!”

And so began The Great Muppet Caper, the 1981 film conceived and directed by Jim Henson as the Muppets’ tribute to the fabulous Hollywood film extravaganzas of the 1930s and ‘40s. A classic jewel heist story combined with lavish production numbers, the film was the perfect showcase for Miss Piggy’s extraordinary talents. She sang, she danced, she rode a bike, and in her most spectacular scene, she performed a monumental water ballet in the spirit of Esther Williams.

Miss Piggy’s fantasy sequence began shooting on January 8, 1981; it was extremely complicated and required extensive preparation. The Muppet Workshop tested puppets in water to see if the flocking stayed on when wet, if the foam retained its shape, and if the wet puppets would actually stay afloat. Various adjustments were made until the right combination of glue, packing bubbles and flocking came together to ensure Miss Piggy would retain her grace and poise under water. Designer Calista Hendrickson created a stylish bathing costume for the star. Technicians rigged a system so that puppeteer Frank Oz (wearing scuba equipment) could operate Miss Piggy underwater without leaving a trail of bubbles. A full size pig costume was constructed for a child actor/swimmer for the long shot of Miss Piggy diving into the pool. Charkie Phillips, a water choreographer, and twelve swimmers were flown in from Los Angeles to work with the film’s choreographer Anita Mann and the six swimmers already on the scene.

One of the last scenes to be shot, this amazing aqua ballet took place in a specially built 50 x 80 x 8 foot pool on Stage 1 of EMI Elstree Studios outside London. In a memo to his staff in New York, Jim Henson wrote about the scene, “It’s safe to say that no one has ever done a sequence like this in any other film. At least not with a pig.” 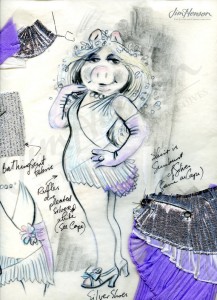 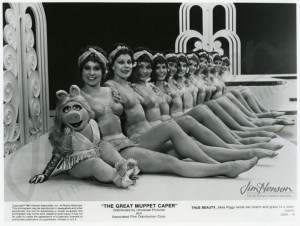 Publicity still of Miss Piggy and her fellow water ballerinas, 1981. 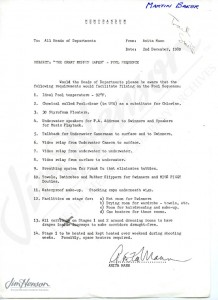 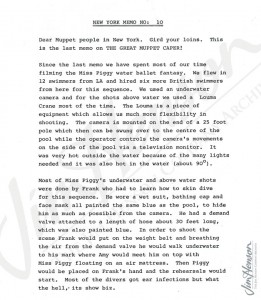 Memo to the NY staff from Jim, Frank Oz and David Lazer describing how they shot the scene in the pool.