Jim’s attendance at the American Film Institute’s event in Washington marked the start of a strong relationship with the organization. John Huston was honored that year, and just six years later, Jim would be, too. He was an active member, providing support to AFI and taking an interest in the education programs through the AFI’s Center For Advanced Film And Television Studies. To that end, Jim led a seminar as part of the Elton H. Rule Lecture Series in Telecommunications on May 6, 1986. The audience was welcomed by James Hindman who spoke of Jim as being, “…admired for a range of accomplishments that are exceptional in American television and film. Rarely do you find an individual who has introduced so many levels of sophistication to the medium…He’s an extraordinary individual.” With an additional introduction from Elton Rule himself, Jim took the stage.

Starting with Sam and Friends, Jim related his professional story, showing clips, and answering questions from both Rule and the audience. Rule asked him about the cross-over between film and television and the advantages of having a television background when working in film. Jim responded that television/video techniques were indeed useful as he saw all screen media in the future as being “electronic” (meaning digital) and “high resolution” (meaning “high definition”). “To be working in films sometimes feels very archaic,” he went on, “It feels like you’re using really old techniques…compared with what you can do on video.” He described the work of Digital Productions, the company that created the digitally animated owl for Labyrinth, as being the future of filmmaking. His last words, however, were about the power of puppetry, despite its ancient roots and the “limited, stylized version…” it provides, giving the audience “half the information” while letting the imagination fill in the rest.

In April 1989, Jim was honored by the AFI and gave another presentation, this time focusing on the techniques used for The Storyteller and The Jim Henson Hour and then going back through highlights of his feature films. He ended with discussion of his forays into computer generated images – starting with the early animated counting films for Sesame Street in 1970, touching on the Labyrinth opening, describing the character Waldo, and the process for the backgrounds of Song of The Cloud Forest. Jim noted that, “The technology of television is certainly changing, evolving all the time, and I think we are getting closer to the blending of the electronic and the movie picture.” Clearly, Jim’s predictions for the future were right on target. 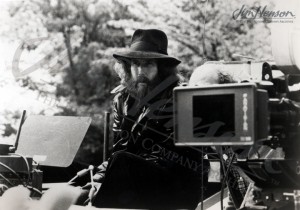 Jim was happy to share his extensive technical knowledge through programs at the American Film Institute.