Jim’s move to New York marked an expansive period in both his artistic and professional development. With more and more of his work generated by the New York based networks, Jim was traveling north regularly with his Muppets for appearances, particularly on NBC’s Today Show. What were once or twice a month appearances in 1961 became weekly appearances by the end of 1962. In the first half of 1963, the Muppets were on Today twenty-four times, performing an array of bits ranging from Rowlf and Baskerville (released from their Purina duties) doing a telephone survey to a parody of the Huntley-Brinkley report first created for Jim’s local Washington, DC show Sam and Friends. That spring, they did a couple of Mike Douglas Shows and The Jack Paar Program before starting Rowlf’s long run with The Jimmy Dean Show in September.

The Henson Family, with two small children and a cat in tow, hurried up to New York between appearances. They moved into an apartment on Beekman Place in the building where their friend Burr Tillstrom (creator of the Kukla, Fran and Ollie TV program) lived. After residing in the Maryland suburbs for much of his life, high rise living in the center of a big city provided a different perspective on the world and gave Jim new visual experiences to draw on for his film experiments.

Apartment living also meant that, for the first time, Jim would need a separate workspace away from home. He rented space for himself, Jerry Juhl and Don Sahlin in a small walk-up building at 303 East 53rd Street (eventually joined there by Frank Oz, Jerry Nelson and various secretaries). This magical place would serve as Muppet headquarters for five years, providing fertile ground for Jim’s film Time Piece, hundreds of commercials, and dozens of comical Muppet pieces and experimental projects. It consisted of two rooms, a terrace, a small space for the secretary, and a bathroom. The front room facing the street served as the workshop, home to puppet and set building materials, Jim’s animation table, and Don Sahlin and his practical jokes. The back room looking onto the terrace housed Jerry Juhl’s desk, an Ampex tape machine, Jim’s desk and big black Eames chair, a table for sharing lunches and ideas, and a papier-mâché moose head. It was here that Jim sketched out characters, negotiated with his agent over the phone, worked on scripts, and stayed up all night with his colleagues putting the finishing touches on the project of the day.

See some footage shot by Jim Henson of the view from his New York City apartment in early 1963. 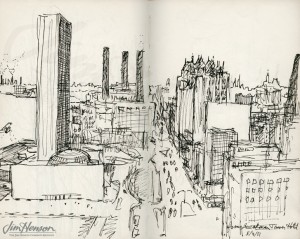 Jim’s New York City view sketched during a visit in 1961. 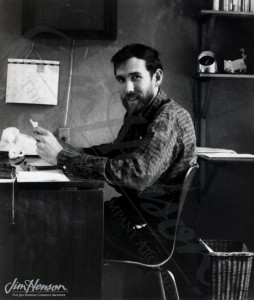