By season three, Scooter was starting to get more screen time on The Muppet Show, and with the episode featuring Lynn Redgrave, Scooter got to be both stage manager and to play a role in what was a unique production of Robin Hood, Muppet style. This was one of only a handful of episodes, like Brooke Shields’ Alice in Wonderland and Marty Feldman’s Arabian Nights, that told a specific story throughout rather than being a series of comedy and musical numbers. Scooter was Alan-a-Dale, one of Robin Hoods’ men, and he also provided narration. He began the show, of course, by introducing the guest star. Lynn Redgrave was a member of an exalted British theater family, and became famous for film acting when her performance in the title role of Georgy Girl earned her an Academy Award nomination.  A busy Hollywood career was launched, and she also enjoyed enormous success on the stage in both London’s West End and on Broadway.

Redgrave’s show began with much cavorting among Robin Hood’s Merry Men, introducing Fozzie as Little John (wearing a very Kermit-esque collar) and starring Kermit as Robin Hood. Much to Miss Piggy’s dismay, Redgrave got to play Maid Marion, sharing a romantic song with the frog. (Note that Kermit’s mandolin is the same one that he strummed in 1962 as the minstrel in Tales of The Tinkerdee, handmade by Jim.) Miss Piggy was relegated to the role of Sister Tuck (Kermit’s creative way of creating another female role,) and Gonzo played the Sheriff of Nottingham. In a bit of type casting, the Muppet Newsman served as the Town Crier.

Viewers might have noticed that there were a lot of arrows zinging through the air in this episode. To ensure that no one got hurt, Jim hired a special stuntman with archery skills, George Fisher, to shoot the arrows from off camera.  Gonzo didn’t mind getting hurt, and in his weird way, enjoyed demonstrating the Sheriff’s torture devices on himself.

Each episode was the product of a several writers. In this case, head writer Jerry Juhl worked with Jim Henson, Chris Langham and Don Hinkley. The number of writers was usual, but because of the format of this particular show, putting the script together was a challenge. “A difficult job,” Juhl explained, “because in the ordinary way this is a variety show and we can all work separately on writing the scenes. But because this show has a continuous thread, we had to work very closely together all the time with time being the enemy. This show could never have been written if we hadn’t had a Christmas production break.”

Throughout the show, an unhappy Miss Piggy did what she could to disrupt Redgrave’s leading lady turn, even locking her in the dressing room. But things backfired when Miss Piggy found herself tied to a chair in the dungeon as Kermit sang to his guest star. As it happens, Redgrave and Miss Piggy may have had more in common than they realized. Along with her film and stage career, Redgrave had a long stint as a spokeswoman for Weight Watchers.

Kermit with his mandolin on Tales of The Tinkerdee, 1962. 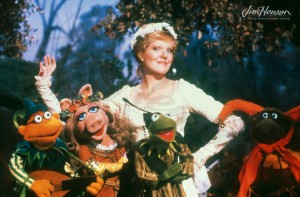 Lynn Redgrave cavorting with the Muppets in their version of Robin Hood on The Muppet Show, 1979. 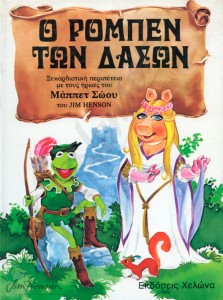 In the Muppet storybook version of Robin Hood, Miss Piggy got to play Maid Marion.

This entry was posted in 01-January '79, 1979, Muppet Show and tagged Lynn Redgrave, The Muppet Show. Bookmark the permalink.