Jim always looked for ways to bring people together and to let his staff know they were appreciated. His colleagues were also his friends, so mixing his work and his social life was natural. The Henson holiday parties were an important part of each year’s calendar and much anticipated by all potential invitees. Sometimes they were large, elegant affairs at places like New York’s Tavern On The Green. Other years, they were festive but more intimate, held at the Henson offices or smaller restaurants. Often, special children’s parties entertained the staffs’ offspring, usually with the appearance of one or more of their favorite characters. After months of hard work, it was a nice chance to relax and enjoy each other’s company in celebration of what had been accomplished that year.

In 1981, Jim hosted three parties. The first, on December 4th, was a dressy affair at a downtown New York restaurant called The Greene Street Café. Michael Frith’s invitation design featured Kermit as Bob Cratchit with Robin as Tiny Tim on his shoulders. Not to waste good art, this design reappeared more than a decade later on promotions for A Muppet Christmas Carol. With production on both sides of the Atlantic, Jim made sure everyone was included in the holiday festivities. The second party, held on December 15th for his UK colleagues and friends, was at a fashionable restaurant outside London called The White Elephant on The River. Back in NY a week later, Jim hosted an open house at his headquarters on the Upper East Side, allowing everyone to enjoy the recently finished decoration of the impressive space. With his work family well taken care of, Jim spent the rest of the holiday with his personal family.

A sampling of invitations to Henson holiday parties: 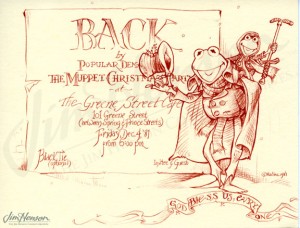 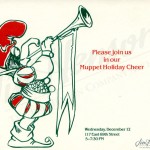 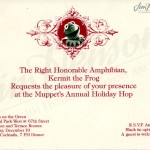 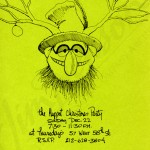 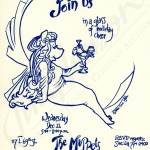 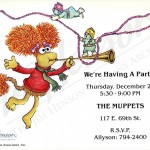 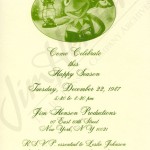