In the 1987 television special, A Muppet Family Christmas, Kermit explained that he valued the holiday as it represents, “…the whole family starting to come together…life would just pass in a blur if it wasn’t for times like this.” Jim agreed, remarking that, “It’s what I think of Christmas as being, a time for family to gather together.” Given that he had been branching out into an array of styles and media during the 1980s, it made sense that be might bring the group – both puppet and human – together for a reunion under the guise of a Christmas special.

For the show, Jim charged his long-time creative partner, Jerry Juhl, with writing the script and they called in what was described in the press materials as, “a group of performers with a couple of hundred collective years of puppetry experience.” These were the people behind (or under) the characters from Sesame Street, The Muppet Show, and Fraggle Rock representing the three dominant species of Muppet. Co-producing were Martin Baker and Diana Birkenfield, two seasoned professionals that, between them, had worked on practically every Henson production. Another stalwart of the Henson team, Peter Harris, directed, and veteran Larry Grossman oversaw the music. The set was designed by Stephen Finnie, a regular part of the Henson team on practically every Toronto production going back to the early 1970s.

On camera, the characters gathered at the home of Fozzie’s mother, despite the fact that she had planned a California vacation and had rented the house to Doc and Sprocket. The Sesame gang intermingled with the Muppet Show family, and Robin, when exploring the basement, met the Fraggles, learning about the pleasures of giving. One storyline revolved around the difficulty Miss Piggy had joining the group, revealing Kermit’s deep feelings for her in his expressions of concern. Another much sillier one involved the Swedish Chef, Big Bird and a turkey with strong survival instincts. The Muppet Babies made a cameo in home movies, and the warmth of the holiday came through in various musical numbers. Overall, the inclusive sense of family, pervasive in all Henson shows, made for, as TV writer Matt Roush described in Time Magazine, “…a cuddly, giggly Christmas present for the ages.”

The previous year, Jim had made a cameo at the end of the 30th Anniversary special – he got stuck with the bill for the evening’s dinner. It was, as Jim noted, his Alfred Hitchcock moment, and he clearly enjoyed it. At the end of A Muppet Family Christmas, Jim appeared again, this time in the kitchen, washing dishes with Sprocket. In an interview to promote the special, Kermit made fun of Jim: “He’s not an actor, you know…it’s that whole thing about…getting his signature into the work…it’s sort of a cliché, actually. But you know, we indulge the guy.” 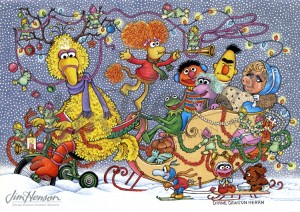 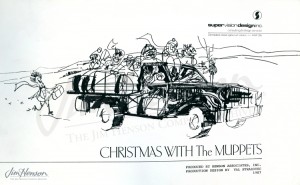 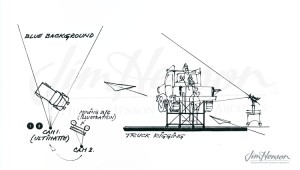 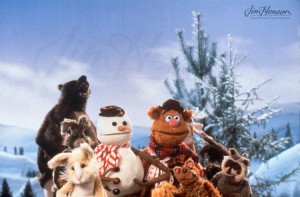 Fozzie and his comedic partner, the snowman, in A Muppet Family Christmas, 1987. 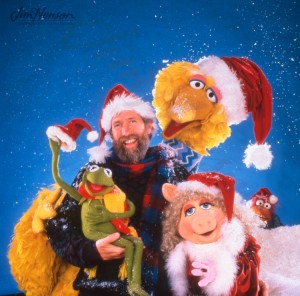 Jim celebrating the holiday season with his Muppet friends, 1987.