Sam and Friends, Jim Henson’s first television program on local Washington and Baltimore television, aired each weekday, often twice a day, for six and half years. By the time the show ended its long run, Jim’s characters, firmly identified as Muppets, were known across the country through appearances on national talk and variety shows and in hundreds of commercials. Along with his professional development during that period, Jim attended and graduated from college, met and married his wife Jane, traveled to Europe, and had two daughters. It was an extraordinarily productive time in his life and set the stage for the next thirty years.

Sam and Friends was home to a repertory group of characters representing a range of personalities and puppet types. The nominal star, Sam, was a wide-eyed, smartly dressed fellow whose unchanging face was set to constant surprise. One of the earliest puppets created by Jim, Sam was made of papier mache, and some of his pals were made of other hard substances like plastic wood. This limited the ability to change expressions, but in the spring of 1955, Jim created a puppet out of fabric from his mother’s old coat, and put it directly over his hand without any structure or stuffing. This was Kermit, and his flexibility enabled him to change expression with the crook of a finger, making him incredibly accessible and believable to audiences. It’s no wonder that Jim connected so quickly with this character and immediately began using him as a sort of alter ego. And it’s no surprise that Kermit, and a similarly constructed character Harry the Hipster, became the most visible puppets on the show and had the honor of starring in the final episode. 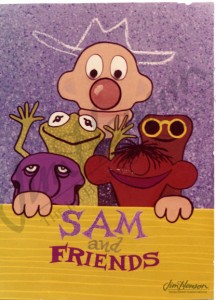 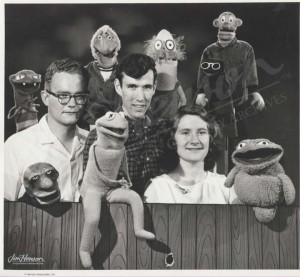 Jerry Juhl, Jim and Jane Henson and the Sam and Friends gang, 1961. Photo by Del Ankers. 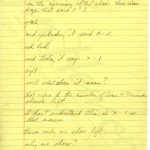 Jim Henson’s handwritten script for the last episode of Sam and Friends featuring Kermit and Harry, December 15, 1961. 1 of 3 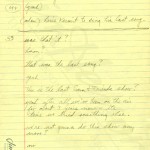 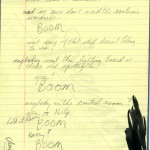